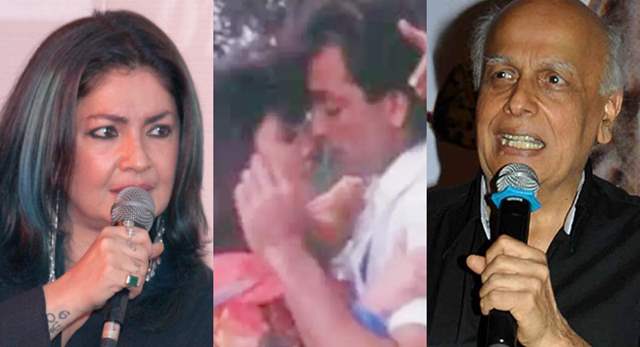 Bollywood actress and filmmaker and the eldest daughter of Mahesh Bhatt, Pooja Bhatt is preparing for her comeback and currently she is out and about promoting her upcoming web series titled Bombay Begums.

While we all know of Pooja's directorial ventures, she is all the more appreciated and spoken about for her acting skills and stellar performance in the 1991 hit film Sadak.

Recently, in an interview with Bollywood Hungama, she opened up about the lessons she learnt on the sets of the film Sadak. And also shared what advice her father and director Mahesh Bhatt gave her when she had to kiss Sanjay Dutt at the mere age of 18 years!

While speaking to the entertainment portal, Pooja, who was the co-stars of her ‘idol’ Sanjay Dutt in the film Sadak, directed by her father Mahesh Bhatt revealed the important advice her father gave her.

Innocence needs to be the approach. This was the first lesson I learnt on sets of Sadak many, many years ago, when I had to kiss my icon Sanjay Dutt, I was all of 18 years, and here I was kissing the man whose posters I had in my room.

I remember my father taking me aside and telling me something that has remained with me for the rest of my life. He said, 'Pooja if you are going to feel vulgar, it is going to look vulgar. So you need to approach a kissing scene or lovemaking scene with a lot of innocence, grace and dignity because the intention is communicated.'

The actress explained how exactly her father made her understand about performing the scene. Pooja shared how Mahesh Bhatt explained to her how the kissing on the screen would look vulgar if she feels vulgar.

Meanwhile, Pooja Bhatt recently opened up about her comeback, in an interview with SpotboyE.com. Her web series Bombay Begums is scheduled to premiere on March 8, 2021, and will stream on Netflix.