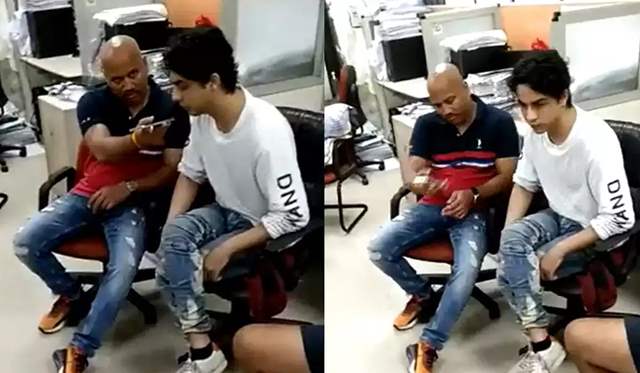 While Aryan Khan has witnessed relief in the drugs case as he was released on bail but a special investigation unit (SIT) of Mumbai Police has dug deep into it and found something substantial. The SIT team found CCTV evidence of Shah Rukh Khan's manager, Pooja Dadlani meeting KP Gosavi and Sam D'souza in Lower Parel, Mumbai.

According to reports, Dadlani's blue Mercedes was spotted in CCT footage in the area, just as mentioned in the affidavit of witness, Prabhakar Sail. A report on IndiaToday states that the team probing allegations of 'extortion' in the cruise drug case involving Shah Rukh Khan's son, Aryan Khan, are now likely to register a case against Gosavi and will likely call in Dadlani to record her statement.

In his written affidavit, he claimed that Dadlani, Gosavi and D’Souza, met on October 3 at Lower Parel. The investigating team scanned the footage of 10-15 CCTV cameras in the area and found the said blue Mercedes and two Innovas in the area.

It has been alleged that Gosavi, who was also a witness in the drug case, posed as an NCB officer and had ‘police’ written on his SUV.

Gosavi is believed to have blackmailed SRK and asked for a sum of Rs 25 crore, in order to let his son walk free from the drugs case. Of the said amount, Rs 8 crore was to be paid to zonal director Sameer Wankhede, Sail said in his statement.

Meanwhile, Sam D'Souza, on Wednesday, approached the Bombay High Court seeking pre-arrest bail. In his plea, he claimed that Kiran Gosavi had taken Rs 50 lakh from SRK's manager to get Aryan Khan released, and the amount was returned after the NCB arrested the 23-year-old in the case.

He also claimed that NCB officials were not corrupt and said that Gosavi and Sail were calling each other pretending to be NCB chief Sameer Wankhade by saving his name on their mobile phones to pretend they were in touch with him.

2 months ago If this happened to one of my loved ones my main concern would be to rescue them at any cost, you talk later or assist in investigation after your loved one is safe .For me what made it clear that this was a set up, are 3 photos I saw and since a photo is worth a thousand words. I support that the family decided to cooperate by talking with the kidnappers and handing over the amount in good faith, I support them 100%, because if you see on all media the person who is asking you for money manhandling your child with approval from the top brass in the agency...you know your family member is in danger and you are dealing with corrupt behavior from those who are supposed to be taking care of you. A very sad and scary state of affairs.

2 months ago Ohh god I have to disable auto correction in my mobile . Please excuse me for the typos . 😔

2 months ago The 90% of police, CBI in India wasting their talent and time only in solving celebrity problems . You caught an adult with drugs, put him jail and then immediately put him in drug irradiation center , if you really want to solve the you h generation drug problem . But no, every celebrity case dragged beyond time not to solve but to propaganda. So it’s useless . Sad bit true money speaks , and but respect in India . And the reaches in this country are the mostly illiterate. Actors, politicians and cricketers. Well educated and prestigious people are there to open car doors of illiterate people in our country .

+ 8
2 months ago So basically, they kidnapped Aryan under the guise of a false arrest for 6 gm of charas in Aryan's friend's shoes and then called SRK's manager who confirmed over the phone it was Aryan and paid up for Aryan's safety. Was it misguided? Yes. What would you do as a parent if the officer who arrested your kid had a goon call you for ransom - or else risk your kid's safety in jail? This means the Wankede accusation of bribery is true. If a corrupt police force gets my kid and I am not sure of his safety, I wouldn't care what the law says against ransom. I would prioritize my child's safety. It was not about protecting Aryan's reputation because he was arrested and taken in under the full surveillance of the media. SRK needs a smarter manager, but I think their heart was in the right place.