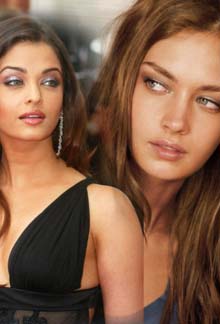 Mumbai, Sep 19 I am a big fan of Aishwarya Rai, says Playboy model Candice Boucher, who is set to make her Bollywood debut with 'Aazaan' and describes it as an opportunity of a lifetime.

'I did know about Bollywood before doing this film because while growing up in South Africa, we did have a few Indian movies showcased on the TV. I was aware a little bit about the industry that it's very colourful and has a lot of music and dance,' Candice told IANS in an interview.

'I don't remember the names of the film right now, but as far as the actors are concerned, I am a big fan of Aishwarya Rai. She is gorgeous and a great actress too. The fact that she has made a mark not only in Bollywood but also Hollywood, speaks a lot about her. She is beautiful,' added the model who visited India six times earlier and loves the family bond people share here.

The 27-year-old, who also modelled for magazines like FHM, GQ, Cosmopolitan, Sports Illustrated and Elle, is excited about director Prashant Chadha's 'Aazaan'.

Entrepreneur-turned-actor Sachin Joshi plays the male lead in the film, while Candice is roped in as a sand artist and as Sachin's love interest in 'Aazaan', slated for an Oct 14 release.

The model says being a part of a Hindi film was nerve-wracking for her.

'Prashant got this project to me. He gave me a call when I was in New York last year and told me that he has a part that is perfect for me. I was little nervous because it was a Hindi movie. I don't speak the language and my dancing is also not really up to the mark.

'But Prashant kind of scripted the role around me and my personality and then he changed all my dialogues to English. It was a fun experience, but equally nerve-wracking,' said Candice.

Will she stay and make a career in Bollywood?

'Prashant just gave me an opportunity of a lifetime and I couldn't say no to it. It was a learning experience. If I think about going in the Bollywood direction, I have to see my Hindi definitely. It has to be a lot better and also the dancing. So at the moment I'm happy that I got this opportunity and I'll keep on trying to learn Hindi. But Bollywood isn't something I'll only concentrate on.

'However, if something great comes up, I'm open to the idea,' said Candice who has done an item song in the film, which was choreographed by Ashley Lobo.

Ranveer is Fulfilling his Husband Duties towards Deepika? ...
3 minutes ago