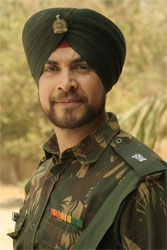 Piyush Sahdev, who plays the role of Kulwant Singh in Sony's Meet Mila De Rabba is certainly flattered to the hilt.

One of the social networking sites has recently nominated him as the most handsome Sikh on screen. When asked him, the actor quotes, "Yes it is true. I got an SMS from my friend saying that I am being nominated as the most handsome Sikh, and the nominations on the site were Akshay Kumar, Salman Khan, Sunny Deol and Kabir Bedi. To my surprise, I got 86% of votes amongst all of them. I was so surprised to get this appreciation from my fans."

"Initially I was very apprehensive about my look in the show. I used to check out myself in the mirror to see how I look before every shot, but now have got comfortable playing it. But I must say, hats off to the Sikhs who follow their customary traditions day in and day out", concludes the actor.

Indeed a great compliment to feel proud of!!

13 years ago what rubbish...y r u comparing urself to salman akshay and all..lol

Niti_89 13 years ago He''s from Delhi but still no doubt Kulwant is the most handsome Sikh!

+ 5
13 years ago he is from punjab anyway how can I contact him?

+ 2
13 years ago awwwwwwwwwwwwe!
he looks so handsome!

13 years ago congrats he is lookin handsome in tht show, i wish he comez back in there, the show is not lookin good without him.

btw...salman khan is not a sikh

Niti_89 13 years ago congrats Piyush
i m really veryyyyyyyyyyy happy for u!!!
u really rock!!!!!