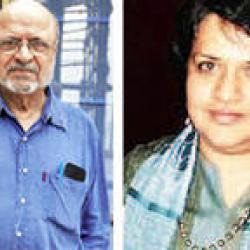 Pia Benegal, who has designed costumes for "Samvidhaan", a 10-part TV series directed by her father Shyam Benegal, says creating "period specific" costumes for it has been a painstaking process.

The TV series talks about the making of the Constitution of India.

She says her brief was to design the costumes that were specific to the period when the Constitution was created.

"I was asked to work on 'Samvidhaan' as the costume designer and recreate costumes for each character as realistically as possible. My tailors worked tirelessly on this project.

"Looking for specific accessories was a painstaking yet exciting exercise. Gradually, I saw all my characters come alive. Each one of them began to look more and more like the original people whom we know as the members of our Constituent Assembly," said the designer.

Pia's first film assignment as a costume designer was "Antarnaad". This took her to the National Institute of Fashion Technology, New Delhi, where she studied and did a diploma in fashion design. Soon, projects like "Mammo", "Sardari Begum", "Making of the Mahatma" and "Zubeidaa" followed.