View Profile
Rajesh Khanna was hailed as "King of Emotion" and this king made the atmosphere very emotional when he addressed the audience while receiving "Phalke Legend Actor Award" from chief guest Shri A. Ramesh Prasad (M.D.-Prasad Group of Companies). "Whatever I am today is because of film industry. The industry made me star and then super star. I am thankful to every one from my producers to spot boys with whom I shared forty two years of my life.After the journey of these long years n 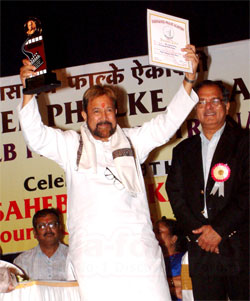 Featured Video
ow the moment has come where I am being felicitated by my own people.G P Sippy gave me a break in 'Raaz' and Shakti Samanta made me star and the love of audience made me super star. I really have no words to thank for the love I received," Kaka said emotionally, and further said, "I am really proud to be the part of this industry which represents the true picture of communal harmony. I fully agree with this that there is no business like show business" Kaka also confessed that he made many mistakes in life and there was a pin drop silence when he said "mujh mein bhi kuchh kamjoriyaan hai aur in kamjoriyon ke chalte mujhse bhi kai galatiyaan hui hai".