Mumbai, May 2 (IANS) A passport problem for Pakistani artists is forcing Bollywood composer Pritam Chakraborty to rush to Lahore to record a song with Atif Aslam for the upcoming film 'Kismat Konnection'.

'I need to urgently record a song with Atif for Aziz Mirza's 'Kismat Connection', but he is suddenly having problems with his passport. So he can't come to Mumbai, I'm flying down to Lahore to record the song with him,' , who composed music for films like 'Life...In a Metro', told IANS.

Despite all the talk of amity, solidarity and free-flowing cultural exchanges between India and Pakistan, artists from the neighbouring country seem to be finding it hard to obtain permission to come to Mumbai to record songs.

Pritam has consistently and tellingly used Pakistani voices - the latest being Atif in the 'Race' track 'O jaan-e-jaana'.

He doesn't mind making the trip to Lahore because he has more business to mix with the pleasure of visiting Pakistan.

'I've never been to Pakistan. And 'Jannat', which has my music, is being premiered in Pakistan later this month. So it would be mixing business with pleasure.'

However, he says if the passport problem persists, he will rope in an Indian artist to record the promotional number for Mani Shankar's 'Mukhbiir'. 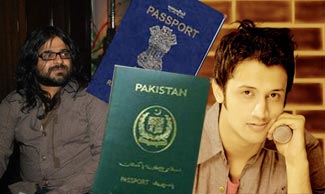 'There's one more song, a special promotional number, which I've just composed for Mani Shankar's 'Mukhbiir'. That requires Rahat Fateh Ali Khan. I just might record that song too while I'm in Lahore. Or I may go for an Indian voice.'

Apart from Pritam, others are equally worked up.

Mahesh Bhatt, who spearheaded Bollywood's musical move towards Pakistani singers, said: 'I started this whole movement of musicians and actors from across the border to Bollywood in those cold days when looking towards Pakistan was looked at as an act of treason. I was told what I did was suicidal.

'During the last four years we've done more to improve India-Pakistan relations than our predecessors have done in 56 years. We're premiering our 'Jannat' in Pakistan on May 14.'

Bhatt, who brought the Pakistani band Jal, actress Meera, rock singer Mustafa Zahid and others to India, says he had a discussion on the subject with Prime Minister Manmohan Singh.

'At a private dinner, I categorically asked the prime minister if we could make financial investments across the border. He assured me there would be no problem from his government or Pakistan's government either,' said Bhatt who stopped directing films after 'Zakhm'.

Bhatt, who directed critically acclaimed films like 'Saaransh' and 'Kaash' and commercial hits such as 'Naam' and 'Hum Hain Rahi Pyar Ke', now concentrates on his production house Vishesh Films.

So what does Bhatt have to say about the new developments?

'If singers from across the border are finding it difficult to come here, then let me tell you, our prime minister had personally assured me that the entertainment industry is free to move back and forth and that the bureaucracy of neither side would be allowed to obstruct us.

'Globalisation means a free movement of capital and creativity. Bureaucrats can't throw roadblocks into the process of rapprochement. If there's a slowing down in the process of thawing the ice between the two countries, I'll personally go to our prime minister and present the issue to him.'

Bhatt is ready to take an appointment with Manmohan Singh on what he sees as a clamping down on globalisation.