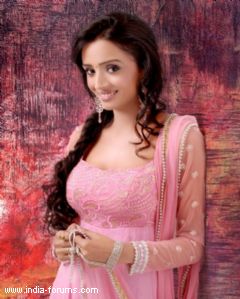 Parul Chauhan currently seen in Zee TV's Punar Vivaah Ek Nayi Umeed as Divya talks to us about her show being pulled off air and her stint in Bollywood. Though, the actress is upset about her daily soap she is excited too as at the same time she is looking forward for her new innings.

The actress is quite ecstatic about bagging a role in the film post her show Punar Vivaah Ek Nayi Umeed ends, "There is this one movie which I have bagged but now the producer and director are planning to re-start the schedule. So by December or Jan next year we would start the shoot for the same," says Parul.

Elaborating about her role in the film, she says, "My role is that of a psycho girl. All I can say right now is that it's more like what Bipasha Basu had played in the flick Raaz. But let me make it clear that it's not a horror film. For more details you'll have to wait for the official announcement to happen."

Parul says that the film is the director's debut film and so is the star cast of the film,  "There is this new director who will be debuting in Bollywood with this film. Also the star-cast is going to be all new comers. We all are very excited with this project."

Talking about her TV show, Punar Vivah which is going off air on 29th of this month. "Well it was sudden news for us as well and I am really feeling bad as the show had just picked up with the ratings. You can never say what will happen as there are new shows which come and within few months are pulled off air, so nothing is certain here," replies Parul.

Is she looking out for doing more projects on Television? "Well I've not got any offers till now but let's see if something interesting comes, I would go for it," she concludes

The actress has already done a movie called 'MYOHO'. Though, when asked about it, she commented saying, "Will get back to you later."

We are sure Parul's fans want to see more of her whether it is on TV or films.

sandiab 6 years ago such awesome news i am happy that u are doing this sort of movie and i really hope it does well. mwah

Sruthy.L 6 years ago Love you Parul chauhan.Good Luck of your future work.

moniluvskinshuk 6 years ago All the Best my Angel PARUL CHAUHAN . Luv u &lt;3

Anisha_anitan 6 years ago Oh piss of zeetv for ending pv

ThruMyEyez-Nita 6 years ago All the best for your movie Parul! You were brilliant in PV, will miss you and the rest.

sameesam 6 years ago All the best parul chauhan for ur movie.keep rocking

DevaseNa. 6 years ago All the best parul chauhan
will miss u as Divya

Anurag Kashyap Clarifies His Image of 'Consuming Drugs'; ...
22 minutes ago