Actress of yester years, Asha Parekh has made her debut on television with 9X’ Tyohaar Dhamaka where she chairs the judges’ seat.

Here is the actress talking about her experience being in the show, her favorite contestants, her take on reality shows and much more… 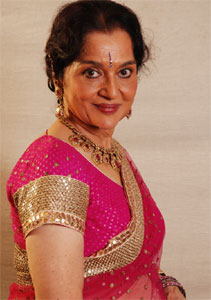 Featured Video
Why did you opt for such a long break?
I was with my family, as they needed me more than anyone. I have always believed that everyone has a time dedicated to people around. I spent half of my life entertaining people and all my fans, and now again I am back.

Your take on 9X’ Tyohaar Dhamaka?
Tyohaar Dhamaaka is a never-seen before concept on 9X. It basically aims in showcasing the Indian festivals through various Indian dance forms. It's going to be a great show, as far as audience viewing is concerned. The show represents Indian culture, which is not being seen now-a-days in reality shows. Moreover being a dancer, I feel elated to be part of such a show.

What made you sign the show? How did all of it happen?
First of all it's a dance show and I, being a dancer respect every form of art. Tyohaar Dhamaaka is very unique, as it focuses on Indian art. SOL productions shared this concept with 9X, and then I was approached for judging the show. I liked the concept, hence agreed.

What is the format/pattern of the show?
There are contestants from 4 zones- East (Purab Ke Suraj), West (West Ke Best), North (Uttar Ke Puttar) and Central (Central Ke Sikander). They perform according to the given theme of the episode and I judge them based their performance, sync with the team, expression and co-ordination. Like any other show there are winners and there are those who have to leave.

What is your role as the only judge of the show? What kind of responsibility do you have to face?
Being the only judge on the show, it really becomes intricate at times. But on a lighter note, I also enjoy the fact that I am the only judge; because that gives me a fair chance to put forth my views about the performances. This also is an advantage to the participants as they get to interact freely with me. As I can see the kind of hard work the participants are putting in, it feels bad when I have to eliminate them. Actually, it's more on the audience to decide whether I'm a good judge or not (laughs).

Other than the show representing Indian art, what do you think are the other factors that will make the show popular among audience?
Tyohaar Dhamaaka has such good dancers that it is really an honor for me to guide and mentor them. All the television stars be it Naman Shaw, Shayantani Ghosh, Narayani Shastri, are very hardworking. There is immense co-ordination between the dancers, astounding choreography and amazing style. In fact, everything in the show is so well structured, that the audience will never find it monotonous.

As we all know that reality shows now-a-days have become an open platform for screening grievances and controversies. So is Tyohaar Dhamaaka also on the same lines?
I would not like to comment on what the other reality shows are depicting, but Tyohaar Dhamaaka is absolutely not heading towards those lines. It is a very feel good show, and the participants are very sociable with each other.

Are you partial towards the west zone because of your own ethnicity?
Not at all, that will never ever influence my judgment. I have always supported talent, be it from any zone.

Lastly, any future plans on coming back in movies?
I did get some roles to act as mother; some concepts were good some were not, but as of now no plans to make a comeback in movies.