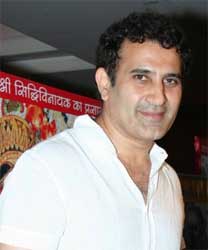 The atmosphere at the studio of Sony's Comedy Circus was one of romance and fun, adding flavor to the theme of the episode 'Jodi Special'.

According to our source, "This time comedy circus will had Parmeet Sethi join Archana Puran Singh on the show. The theme of the show was Jodi Special and Parmeet was the celebrity guest. The concept was not only romantic but also truly funny. It brought out the hilarious disasters of a married life in a chortling manner."

Adds the source, "Priya Marathe and Sunil Pal who always had tough time performing as a couple, did not got very good comments for their performance in this episode too. As it was Jodi Special concept she enacted Chandramukhi and Sunil Pal enacted the various avatars of Devdas, from Dilip Kumar to SRK. The high point of their performance was when he finally arrives onstage as Dev Anand. The concept was that Chandramukhi kept calling Dev, Dev so much that the Bollywood actor Dev Anand himself came!"

Catch this episode this Saturday at 9 pm on Sony Channel.

juggan 10 years ago can anyone tell me where is shakeel siddiqi????he was the show stopper