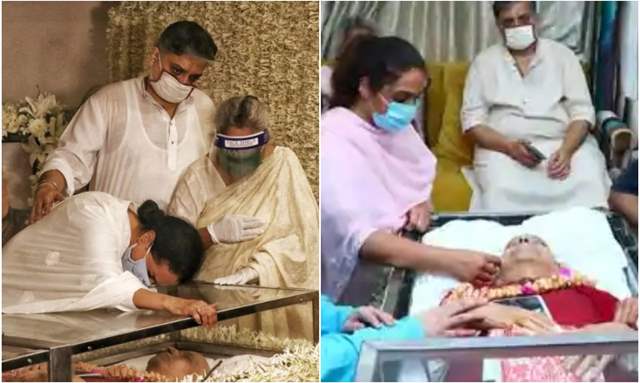 Legendary classical singer Shri Pandit Jasraj breathed his last on August 17 2020, in New Jersey, at the age of 90. This comes as a big loss to his family and friends and also for the music industry. Pandit ji’s body was repatriated from New Jersey on Wednesday and the ‘antim darshan’ was held in Mumbai on Thursday.

An 'antim darshan' of the legendary musician was held at his residence in Versova, Mumbai in the presence of his family members and friends. Pandit Jasraj's wife Madhura, daughter Durga and son Sharang Dev Pandit were present to pay their last respects. Besides, music composer duo Lalit and Jatin Pandit, ghazal singer Anup Jalota and actress Rukhsar also attended the ‘antim darshan’ to bid their final goodbye to the music maestro.

According to Pritam Sharma, media coordinator for the family, the last rites will take place at Pawan Hans Crematorium in Vile Parle. He will be cremated with state honours and be given a 21-gun salute, Sharma added.

In an interview with Bombay Times, his granddaughter Shweta Pandit had said, "We spoke almost every week in the last six months during the pandemic, since this was the one time when we were all at home. When the pandemic struck, he was in his New Jersey home with his students and he had to stay put there."

Shri Pandit Jasraj was felicitated with a lot of honours and prestigious accolades, including the Padma Shri in 1975, Padma Bhushan in 1990 and Padma Vibhushan in 2000. In a career spanning over 80 years, the legendary singer has given the music industry various gems that will forever be remembered.

Our deepest condolences to the family...Rest in peace Pandit Ji...