View Profile
While many were celebrating Republic Day, there were many talented individuals that were receiving the Padma Shri honor. Those that were included on the list were Kajol, Tabu, Irrfan Khan and singer, Usha Uthup. 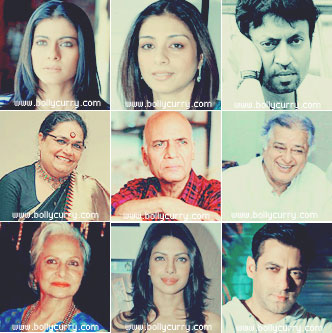 Starting out her career with Bekhudi, Kajol went onto become one of the most successful, famed and loved actresses in Bollywood. Her career grew with films like Baazigar, Dilwale Dulhania Le Jayenge, Kuch Kuch Hota Hai, etc. Tabu too has managed to create a big image for herself with films like Chandni Bar, Astitva, Maqbool, The Namesake and Cheeni Kum. Along with the two actresses, Irrfan Khan is also a hardworking actor who has shown his mettle and gained a reputed spot in the industry. He also has managed to work in many international films such as The Namesake, A Mighty Heart and Slumdog Millionaire.
Striking a chord with her extraordinarily heavy voice, Usha Uthup is one of the popular Bollywood pop singers from the 70's. Her most evergreen classics include song such as 'Ek Do Cha Cha Cha', 'Shaan Se', 'Hari Om Hari', 'Rambha Ho' and 'Dum Maaro Dum'.
Along with these talented people, the legendary music composer, Khayyam, was also honored with the Padma Shri.
Others that were honored include veteran actors such as Shashi Kapoor and Waheeda Rehman. By working in films such as Jab Jab Phool Khile, Waqt, Silsila, Deewar, Kabhi Kabhie, Satyam Shivam Sundaram and more, Shashi has always managed to entertain audiences of any given generation. Along with Bollywood, this veteran actor also worked in many different international films such as The Householder, Shakespearewallah, and Heat and Dust.
Beginning her career with Mann Ki Jeet in 1944, Waheeda Rehman is considered to be one of the most beautiful women that has been seen on the silver screen. Later on in her career, she worked in films such as Pyasa, Kaagaz Ke Phool, Saheb Bibi Aur Gulam, Guide, Reshma Aur Shera, and many more gaining even more fame.
While there are many legendary actors that will be receiving the Padma Shri, it seems that there are a few actors who have managed to miss out on this opportunity. First on this list is none other than Priyanka Chopra. Despite having been on the list for honorable mention, her name was eventually withdrawn last minute because of the IT raid that took place a few days beforehand. Since she had no proof to escape from this problem, it resulted in her name being taken out from the honors.
The same has happened with Salman Khan too. The reason for his name being withdrawn was because it turns out that he's been claimed guilty of the deer case he was involved in. With such problems, he had to let go of his honor and move on.
With Padma Shri being the fourth highest civilian honor, we would like to congratulate those who have managed to receive such an acknowledgement in their career.
Editor(s): Amisha, Hershi & Gunia.