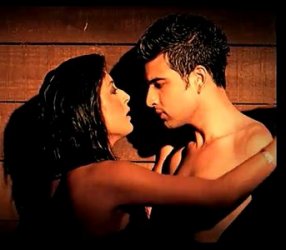 The hot and happening promo of Arjun (Karan Kundra) and Arohi (Kritika Kamra) sharing a moment of intimacy in Imagine's Kitani Mohabbat Hai 2 has already hit the screens. This kick-starts the next big phase in the couple's lives where they will slowly get attracted towards each other. Err, wait on folks!! There is much more drama to happen before the duo consummate their marriage..

Our source states, "This romantic promo has been shot keeping the audience vibes in mind. The channel and production house understand that viewers now want to see Arjun and Arohi getting close and cozy. And this promo is actually a build-up to that very big moment. This will give an indication to the viewers that the love story has certainly begun between the two".

As per the story line, Arjun and Arohi had love for each other before the marriage happened. But situations brought in a sea-change in the way in which they envisioned their future. With them being married now and staying in the same house, sharing the same bed, they will soon develop a physical attraction.

"There will be scenes shown where they are almost on the verge of consummating their relationship. However, their huge ego will stop them from doing so. This will be a gradual process wherein they will realize the love they have for each other. Certain factors like jealousy, ego etc will come before them as hurdles, and the story henceforth will revolve on the manner in which they tackle them", adds our source.

We contacted Karan Kundra who says, "Yes, the romantic promo shot states that there will be an attraction between the two".

Kritika Kamra says, "I am clueless about anything happening in the further track, I just know that I have shot for the promo".

Get ready folks, to see the journey of these two lovers..

ghanashyam 9 years ago karan do u know about magazine pics of kritz?

drpkbastia 9 years ago hi karan i feel very much worried for abuse by pak fans.

9 years ago karan and kritika both of u r matching pairs.in the serial as if unm r made 4 each other.

+ 2
9 years ago waiting desperately for this track to start!karnika/arjohi rox!lotta love and luck!