Ekta Kapoor is back to business, as she is all set for the twin launch of her shows Kitani Mohobbat Hai and Bandini for the first time ever on NDTV Imagine. 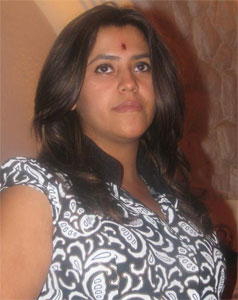 Featured Video
What took you so long to come on NDTV Imagine?
I also don’t know what took me so long to make a show for Imagine. Till September, all my slots were booked by one channel; but after this time frame I had few empty slots. When my contract got over with a particular channel, I met Samir sir and he told me that he wanted me to do a band for him. I agreed, but I wanted to come up with something different for my ex-bosses, as they are the ones who have got me to this place in life.

One should never forget his/her roots. They are the reason behind my very first daily soap. I had to think and think, and come up with something that touched my heart and that’s what I did.

What’s so special about Kitani Mohabbat Hai and Bandini?
Kitni… is a story, which has never been seen before. No extra marital affairs, no third person in their life, no two people marrying other people, no one person dying, its nothing of that sort. It’s a very simple love story. It’s an ideological issue which has never been dealt before. Certain situations create misunderstandings in their life, after which they can never be together.

Bandini is too simple; it has no story but a situation again. The most beautiful aspect in the recent shows that have done well is that they work on situations. Bandini as a character will be so loveable that you would want to be part of her life. If you ask me, it’s about the revaluation of relationship that happens; a young girl comes and questions some young people and has very simple questions in mind. How she comes and joins the family with her innocent love is all about the show.

Why did you choose Ronit for the role of Dharmraj in Bandini?
Ronit has power, stature, and the aura needed for a conservative, yet not so urban rural man. Alongside, he is very stubborn and is much taught when it comes to work. He knows the value of even a one rupee coin too. Above all, he has that Indian-ness in him.

In the conference you said you will soon come up with your own channel? When will that happen?
At this point of time I can’t comment on when it will happen. For now I just know that I have given by bosses and the channel the best shows I had in my kitty.

13 years ago I agree with sita11....it''s hilarious how she states One should not forget their roots...yet the dumb*ss did exactly that by playing with the emotions and values of Mahabharat.....Its not Kahani Humari....its ekta''s friggin Kahani...the so called soap opera queen needs to stick with just saas-bahu serials.....
further on if she really believes in one should not forget his/her roots...she should be one to talk where she shows the audience its alright for two lovers to get married over and over to different ppl b4 they meet!!!! Wut a bunch of bull!!!!!

+ 4
13 years ago I DON''T HV ANY HOPES from ekta ,all her shows in the beginning seem to b very promising but later they all turn into crap stuff & i wonder why these imagine ppl want an ekta show ,look at colors channel ,they r no 1 becaz they r not showing any ekta show !!!!

as such imagine is rocking wid superb shows like ramayan,radha ki betiyaan & now srk''s new show ghar ki baat wud b shown on imagine ,i am not at all happy wid imagine ppl ,why they r bringing ekta to their channel ?????