View Profile
In 2008 Madhur Bhandarkar made a much appreciated movie scripting the reality of the 'Glamour World' into a seeming fictional piece. Titled "Fashion" staring Priyanka Chopra, Kangana Ranaut & Mugdha Godse the movie was a blockbuste at the box office and swept significant awards for the year 2008.
It is time again for viewers to expect 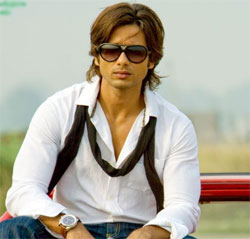 Featured Video
another gripping tale about the world of Fashion. Designer Rahul Jain is said to be planning to do something similar but with a male protagonist. The latest buzz is that chocolate boy, Shahid Kapoor, who has delivered a "hat-trick" of hits with Kaminey, may be considered.
According to our Sources, Rahul says, "'Fashion was a very bad movie. I didn't like it at all. I will be making this movie to break the assumption that the world of fashion is only about glamor". He carries on to say, "A lot of hard work goes behind it & if today we are famous it is due to the amount of hard work that we put in".
Our Sources also reveal that the movie will be based on the harsh reality of the fashion world. It will talk and present the exploitation that does exist behind a glamorous face. Unlike Madhur Bhandarkar's Fashion (which was based on a fictional character), Rahul Jain's approach will be based on the reality which Rahul himself claims to have seen. "It's not based on any fiction but all that I have observed, and dare to talk about", says Rahul.
Well, let's see what the viewers will make of this new approach to the truth behind glamor.
Author: Dilbagh G.