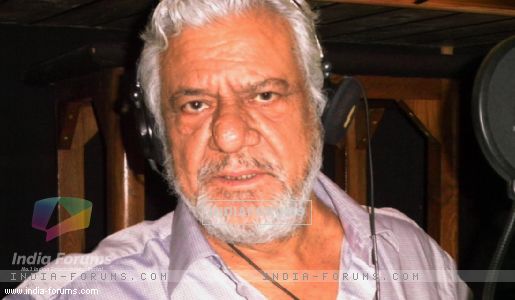 The star of parallel cinema, Om Puri, romanced Oscar-winning British actress Helen Mirren in the gastronomic love story "The Hundred Foot Journey". The movie has evoked good response and the actor says romantic films with older couples can be a good watch too.

"I feel even old people can do a nice love story, but here we don't make that kind of films. In the West, such films are being made and they make a nice romance, which is more like compassion," the 63-year-old said during a group interview.

Co-produced by DreamWorks Pictures, Reliance Entertainment and Oprah Winfrey, the culture-clash drama-comedy has been praised by international media as "a trip worth taking".

A screen adaptation of Richard C. Morais' 2010 bestseller of the same name sees Mirren's and Puri's characters as rivals who eventually fall in love with each other.

The actor says the film is about "emotions and age."

"The film's story is about a French and an Indian restaurateur and their rivalry. It's also about French and Indian culture," he said.

"It's a wonderful film, a very warm film and it also has a parallel love story. It's a different love story, which starts with bitterness and anger and eventually ends in a warm relationship."

Puri, who has also been part of quite a few Hollywood films in the past, praises the industry for giving a bigger exposure.

Asked why actors are crazy about doing Hollywood films, he said: "Every person wants to stretch himself and widen his audience. Since Hollywood has got more exposure and is shown all over the world, it's obvious that every actor would want to do an English film and explore himself."

Meanwhile, Indian cinema too has undergone some positive change with actors like Irrfan and Nawazuddin Siddiqui, who are not conventionally good looking, winning accolades on the global arena.

Puri, who dared to dream cinema in the era dominated by actors like Amitabh Bachchan and tough to find a foothold with his pock-marked face, is happy with his accomplishments.

"I have no regrets at all. I have done quite well for myself. I didn't have a conventional face, but I have done well and I am proud of it," said the Film and Television Institute of India (FTII) alumnus.

From "Ardh Satya" to "Maachis", from "Gupt" to "Hera Pheri", from "East is East" to "The 100 Foot Journey", the actor surely comes with a vast experience in Indian and international cinematic space.

If he is noted for his work on the silver screen, the National School of Drama pass out is equally active on the stage and admits that personally he enjoys doing theatre but prefers films for their wider reach.

"I personally enjoy theatre, but preferably I do films so that I can reach up to maximum audience. If you want to give a serious message, it will reach out to maximum people through films. But through theatre, you can hardly reach out to about 3,000 audience at a time," he said.