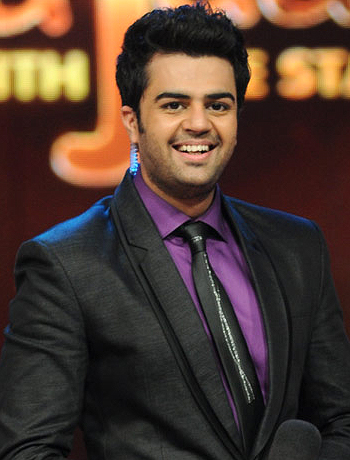 Popular TV anchor-actor Manish Paul has dismissed rumors that he is teaming up with comedian Sunil Grover aka Gutthi of 'Comedy Nights with Kapil' for a new humor-based show on the tube.

"I am not planning anything with anyone as of now. There is nothing of this sort as yet," Manish told reporters here on Wednesday at the red carpet of Big Star Entertainment Awards, when asked about a possible association with Sunil.

He added: "Even I have heard these stories, but I will definitely tell you when everything will get finalized."

Rumor mills were abuzz with news that Sunil, who played the popular character Gutthi in 'Comedy Nights with Kapil', is planning to come up with his own comedy show on a TV channel, and that Manish was in talks for it too.

However, Manish is currently busy with his film 'Tere Bin Laden 2'.

"After that I will soon be back on TV with a show, but nothing is finalized as of yet," he added.

'Tere Bin Laden 2', directed by Abhishek Sharma, will hit the theaters next year. Manish made his Bollywood debut with 'Mickey Virus'.

Sunil Grover on his Upcoming Comedy Show: The show's Purpose is to ...

atominis 6 years ago Sunil Grover is only on Boogie Woogie now. Star Plus show seems like a rumour only just like Pratyusha Bannerjee's new show after she left Balika Vadhu. Manish Paul seems to be busy with Bollywood, why'd he do TV now?

smallwonder 6 years ago Whats the problem with these people... Gutthi nahi hui museebat ho gayi... Really its too irritating now... I loved the character of gutthi but I am really put off by all this walking out, new show, no new show, yes new show and the crap!

kkkkr 6 years ago Kapil rocks no one can compare him and Sunil can't make great show like kapil as kapil is really good he always have given space to the characters ... Kapil rocks..,,

exclusive
Exclusive Barun Sobti on being away from TV: My problem is the ...
13 minutes ago

exclusive
Exclusive Jaan Kumar Sanu on keeping up with Bigg Boss 13, looking up ...
30 minutes ago

Subuhii Joshii loses weight all by herself
37 minutes ago