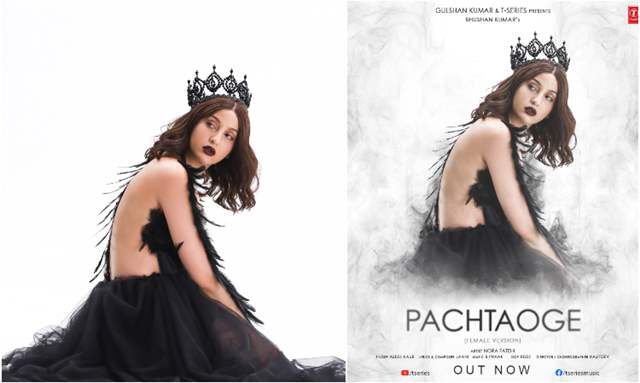 After delivering a blockbuster Pachtaoge last year, T-Series and Bhushan Kumar have roped the Dilbar star for a female version of the heartbreak number. Nora's version of Pachtaoge is designed like an international music video which in complete contrast of its original be it the music or visuals. From the setting to the picturization and the looks, everything is metaphorical yet modern and classy. The video that has been shot creatively, that depicts love - the purity, the heartbreak and liberation - through its choreography that is abstract and subliminal elements are added that portrays various elements while one is on a journey of love and heartbreak.

Talking about the video, Nora shares, "My director Rajitdev and I have always wanted to depict emotions and experiences in a more artistic way giving it an international feel. Rajit and I conceptualized the looks based on the emotions and the state of mind.” Nora will sport two different looks, portraying the myriad emotions and stages of romance. While she's dressed like a symbol of purity in the beginning, her second look is darker and modeled on the Black Swan. Nora explains, "The looks are very important to the interpretation of the emotions and the journey of the levels of heartbreak, From cloud nine feels, innocence naivety to toxicity dark zones of negativity, anger, disappointment and ego.”

The song rests heavily on Nora's shoulders as its more performance-driven than being choreographed. "I wanted that the performance should be internal and all in the eyes. Very composed and settle. I've always wanted to get into this zone and I find the song’s lyrics really work well with this kind of a performance," she adds.

Producer Bhushan Kumar asserts, "We have received a lot of appreciation and love for Pachtaoge that released last year. With the female rendition and a new treatment to the tunes and video, we have given the song a completely new touch. Nora and Rajitdev have conceptualized a completely different kind of video and storytelling. We haven't seen such techniques used in a Hindi music video ever before. It’s a new attempt and I hope the audiences like it.”

Director Rajit adds, "From the very beginning, Nora and I had decided to not take the regular route. We had a story line that we wanted to put out, but we wanted to keep it more abstract and metaphorical than just pushing it down people's throats. The entire video is very symbolic. I have to thank Bhushan ji for his unending support and conviction in us and of course, Nora without whom this wouldn't have been possible. From the creative ideas to the performance, she has nailed it all."

Written and composed by Jaani, music by B Praak, Asees has joined the team to sing this female rendition. Asees tells us, "When I got a call from T-Series for Pachtaoge's female version, I knew there is and will be a lot of expectations. As we know the names attached to it previously are huge like Arijit Singh, B Praak and Jaani. I know that I am in good hands, it is treated well enough and I hope this will join the charts too."

Pachtaoge's female version is OUT NOW on T-Series' YouTube channel.

phadukaran 1 months ago you would expect a lay man to understand this concept, would of been nice if it was more realistic then having all these graphics, would have shown more emotions, just like the originial. Get it that you want to show stronger personality of women,

Payal Ghosh: If I am found hanging from ceiling, remember I ...
16 minutes ago

Mohsin Khan gets injured on the sets of Yeh Rishta Kya ...
23 minutes ago

Breaking
Breaking Namish Taneja back on ‘Aye Mere Humsafar’ sets after ...
51 minutes ago

No Escape Plan for Rakul; To Appear for Questioning before ...
58 minutes ago