View Profile
Directed by Tanuja Chandra, Hope And A Little Sugar is long-delayed, but finally releases tomorrow (April 18). We will see Mahima Chaudhary again, who must have pinned plenty of hope on this film, she of the sugary smile. And must be hoping to storm back into the headlines, after marriage and motherhood, with Hope And A Little Sugar.

Mahima made a dazzling debut in Subhash Ghai's Pardes, opposite Shah Rukh Khan. She went on to win almost all the best debutante actress awards and was acknowledged to be one of the finest finds of Subhash Ghai and the film industry. She paid lavish tributes to her godfather Ghai, and the actress went from strength to strength, notching up several stage shows abroad and raked in the cash. But could not cash in on the film's success as soon after she lashed out at 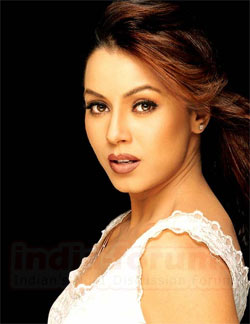 Featured Video
her mentor Ghai regarding exploitation, mainly financial. She admitted her folly later, but could not regain lost ground despite a hit Daag The Fire. She now admits, "None of my films could match Pardes."

Her career was gradually reduced to special appearances (Baghban), item numbers (Tere Naam) and box office disasters (Kudiyon Ka Hai Zamaana, Kuch Meetha Ho Jaye...). Meanwhile, she kept herself in the news by her open affair with tennis icon Leander Paes and deep cleavage photographs splashed with her interviews. Till she caught Leander cheating on her, and dropped him like a flop film, found genuine love elsewhere soon enough, and recently became a proud mom, too.

In Hope And A Little Sugar, Mahima plays a Sikh woman whose husband (Vikram Chatwal) dies during the 9/11 disaster. Tanuja Chandra said she was the perfect choice as "Mahima looks very Punjabi". Mahima was the screen name Subhash Ghai gave VJ Ritu whom he discovered for the big screen. "My father-in-law in the film (Anupam Kher) cannot come to terms with the loss and develops a hatred towards Muslims. Later, I fall in love with a Muslim boy, Ali (Amit Sial), but my father-in-law objects to this because Ali is a Muslim," explained Mahima.

Eventually, Kher does come to terms with reality and learns to live with the fact that his son is no more. The climax sees him facing the same kind of treatment from Americans because of his beard and turban.

Tanuja Chandra, who returns to the directors' chair after a hiatus, wanted to tell her audience that there is always hope in life and one should never give up on it. Mahima's character believes in hope and names her sweets shop, Hope And A Little Sugar.