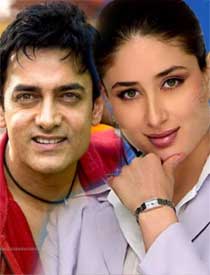 One of the most awaited ventures towards the year's end is Raju Hirani's '3 idiots'; pairing Aamir opposite Kareena for the first time and slated for a Christmas release.


Consequently the movie is in it's final stages of production; and the lead pair has had a helluva water ride to the end!


Reportedly, the final shoot required Aamir and Bebo to cavort under simulated rain for three days in Film City in order to complete their last love song.  The actors had to endure sitting in wet clothes between the shots but to avoid trips to hospital took adequate precautionary measures for a safe health.


As the movie moves to post-production, Mr. perfectionist can breathe a sigh of relief and go back to eating his favorite foods. The weight losing requirement for this movie had been a tough task, Khan has been on a diet consisting of milk and bananas; even going as far to refuse his own birthday cake!


Allegedly based on the novel 'Five Point Someone' by Chetan Bhagat, the movie is produced by Vidhu Copra and will also see Sharman Joshi, R Madhavan and Boman Irani.
Featured Video