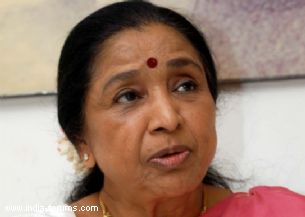 Renowned playback singer Asha Bhosle is fed up with the movie world.

Asked why she has cut down on singing for films, Asha told "IFFI daily": "First of all, I am no longer in the rat race. I am getting fed up. Where are the good, old lyricists who used to inspire the singers?"

The legendary singer is playing the title role in the film "Mai" which is being screened in the Indian Panorama section of the International Film Festival of India (IFFI) here.

The movie is directed by Mahesh Kodiyal.

Bhosle told IFFI daily she had initially said no to the producer "because I see my face everyday in the mirror and it is not suited for acting".

But she relented after her son suggested she should give acting a try.

Asha said though singing was not all tough for her, "it is very difficult to face the camera as an actress".

"Though I do not have the fear of a camera, I am nervous even today when I am on the stage for a show."

"In around 60 years of my career, I could sing 12,000 songs because there were times I had sung even four songs a day."

Who is AK in Sushant's Unseen Video that has Surfaced? Watch ...
3 minutes ago

No Bail for Rhea Chakraborty and Showik Chakraborty? Bombay ...
39 minutes ago

Arjun Bijlani and Reem Shaikh in Ishq Tanha is a soulful ...
57 minutes ago