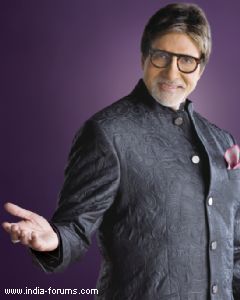 The 2013 edition of 'Kaun Banega Crorepati' has come to an end, and its host, megastar Amitabh Bachchan says working on the reality game show has brought him face-to-face with what goes behind the world of television and general entertainment channels.

The concluding episode of the season was aired on Sony Entertainment Television on Sunday. He played a double role as the host, as well as Lallan bhaiya, a common man dressed in a dhoti-kurta.

After getting a positive feedback on the innovative finale, Big B took to Twitter and posted: "Thank you all for the reactions on KBC and Lallan bhaiya! One take and one shot and a lot of impromptu... 12 cameras though."

"Watched a great amount of what goes on the GECs! Goodness, there is no end to innovation and talent on the 'box'."

The show is the Indian adaptation of international format "Who Wants To Be A Millionaire". KBC first went on air in 2000, and it changed the face of Indian television when Amitabh stepped in as the host.

Except the third season, which was hosted by Shah Rukh Khan, Bachchan has been in the anchor's seat for all KBC seasons.

Now, the 71-year-old will also be seen in a fiction TV show.

10 years ago vidya looks pretty in that picture! she should stop wearing those old-lady saries at awards and reality shows! other than that, shes gorgeous!