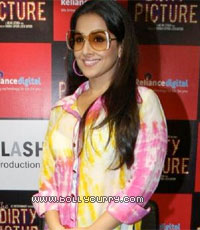 The Dirty Picture, scheduled to release with a mass opening this Friday, will unfortunately not be screened in India's neighbour, Pakistan. According to the Pakistani Censor Board committee, the movie's content has been deemed as too bold and inappropriate for the Pakistani audience. The board took the same verdict earlier this year with Aamir Khan's satire, Delhi Belly.


Officials from Balaji Motion Pictures confirmed the alarming buzz, further adding how it is a loss to the movie's fans in the country. Furthermore, officials believe that this measure encourages piracy as fans in general may approach illicit ways of seeing the venture.
Living in this day and age, and with cinema and audiences welcoming bold projects on their screens, has the censor board taken the right decision? Let us know!