New Delhi, May 27 (IANS) Actor Rohit Roy may have showered love on his brother, TV star Ronit Roy, while anchoring the second season of 'Jhalak Dikhla Jaa' but seems to hate comparisons with him - even by mistake.

Or so it seemed at the launch of an All Sports Bar here this week when a reporter from a popular entertainment channel wanted a few bytes from Rohit but referred to him as Ronit.

Rohit, whose film 'Don Muthuswamy' released last week, stared back at the reporter and just asked him to 'stay away'. 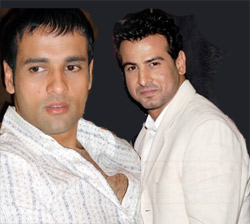 Otherwise, however, the actor is going great guns and says he is quite 'content' with life.

In his upcoming film 'Alibaug', directed by Sanjay Gupta of 'Kaante' and 'Dus Kahaniyaan' fame, he even gets to be paired opposite wife Manasi Joshi Roy, best remembered for essaying the lead role in the soap 'Kkusum'.

'Working with my wife has been fantastic. I always wanted to work with her but it never happened. Now that I have got a chance, it's like 'sone pe suhaaga' (a double advantage) for me!' Rohit told IANS.

Rohit has been on television, acted in films, anchored shows, been a contestant in a reality show and has also been a co-director. He directed one of the short stories in the film.

He is excited about his forthcoming film, 'Mittal Vs Mittal', where he shares screen space with National Award-winning Bengali actress Rituparna Sengupta.