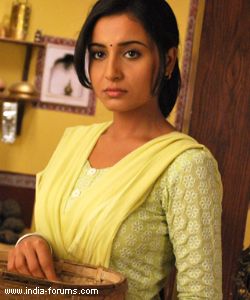 After the entry of Supriya Kumari as Nilu in Zee TV's Bhagonwali - Baante Apni Taqdeer, we hear that Nivedita Tiwari aka Runjhun will be making a shift out of the show.

Nivedita has informed the production house about her decision and has put down her papers. The channel and the production house are now looking for a replacement and we have been told that Ratan Rajput has been approached to play the character.
Both Nivedita Tiwari and Ratan Rajput refused to comment on this matter but the latter insisted that she has been getting loads of offers however nothing has been finalized yet.

The viewers will have to keep an eye on this to see who will change the 'taqdeer' of this show...

atef 8 years ago i still hope that nivedita will change her mind. I am a Filipino viewer and i realy like you as an actress specially as runjun.

shabana18 8 years ago NOOO!! Why do they always change the main lead and expect us to like it???

atef 8 years ago as i was reading the reasons why runjun quits the show i "presume" that it was the production who pushed her to quit the show it is realy their intention to replace her. They don't have trust on her capability which is very inappropriate, since in the first place they were the one who had chosen nivideta and all the while they want to neglect her contribution in the show. Any way nice people are the one who suceeds while...

-Nirvana- 8 years ago Oh soo it's official now ...I will miss you Nivedita! :'( You are our one and only Runjhun and no 1 can replace you and your fabulous acting!I will continue to watch and support this show although it's going to be hard without you there :( Good luck n all the best for the future ;)

luvbbat 8 years ago Nivedita, this show will never be the same without you. I wish somehow things could have worked out. Wish you all the best and you will be sorely missed!

nishersal 8 years ago Thank you Nivedita for giving BBAT viewers Runjhun. You are a talented actress and you have really brought this character to life. It is sad news that you have decided to leave the BBAT family. I know that this decision would have come after painstaking thought na dyour reasons for leaving are valid. Whatever they are, I wish you all the best for your future endeavours. As fans it will be difficult to see comeone else portray the role that we have come to asociate with you and we will feel your absence for some time to come. But, like you, we love BBAt and will continue to support ths show.

atef 8 years ago if this is true i will be sad and maybe i will no longer be watching the show. Whatever nevidita's reason i hope it is valid enough to ignore the efforts of her followers for fighting in keeping the show when it was about to be axed by zee tv. However if you feel that people around you are implying that you are useless you have to choose, between proving your self that they are wrong or just leave, and let them believe that you are realy what they think.

s_daya79 8 years ago awww man, she was really good as Runjhun!