View Profile
New Delhi, June 27 (IANS) Director Kabir Khan's 'New York', a film about about three friends in the backdrop of 9/11 and its repercussions, has received a heartening response at the box office, according to multiplex representatives. 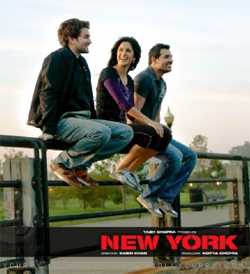 After the initial bout of advance bookings, the demand for the movie's tickets is only heading north, according to Amit Awasthi, manager (programming and operations) of Spice Cinemas, Noida.

'Bookings for the film have been 96-100 percent. It is expected that in about three days, revenues will cross Rs.1.2-1.3 million for us,' said Awasthi.

'Currently 'New York' is giving 100 percent booking and most shows are houseful. As for revenues, we have collected 85 percent for today (Saturday),' said Munish Sharma, general manager (marketing), Satyam Cineplex.

Though Tushar Dhingra, chief operating office, BIG Cinemas did not divulge figures, he said that the film has 'opened very soundly and is giving good results'.

'It has proved to be a strong box office ledge for multiplexes. After a long long time, with the knack that this movie has, it has been able to pull the crowds to the cinema halls again,' he said.

For most multiplexes across the country, 'New York', which stars John Abraham, Katrina Kaif and Neil Nitin Mukesh in the lead, has brought in a much-needed whiff of fresh air, especially after the end of the producer-multiplex strike.

After the strike, which resulted in losses of Rs.3.5 billion for the Indian film industry, ceased, films like 'Kal Kissne Dekha', 'Paying Guests', 'Let's Dance' et al, failed to create a buzz at the box office.

However, trade pundits had predicted a positive fate for 'New York' thanks to its star cast and the Yash Raj Films banner under which it has been produced.

'The audience is hungry for new and exciting content and considering it's A-list star cast, promotional spree and its banner (YRF) - 'New York' is definitely going to bring in a very good business in its opening weekend itself,' Joginder Mahajan, a Delhi-based distributor had told IANS before the film's release.

Now that the film's business is picking up, what remains to be seen is whether it sustains it's position for a week or not as Sajid Nadiadwala's big ticket film 'Kambakkht Ishq', starring Akshay Kumar, Kareena Kapoor and Hollywood stars Sylvester Stallone, Denise Richards and Brandon Routh, awaits its release Friday.