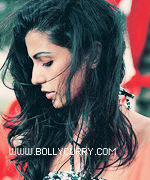 o keep their new starlet-in-the-making under wraps, the curtain has finally been raised.
Stepping into the limelight with the venerated production house's upcoming film Mere Brother Ki Dulhan will be the Kingfisher model turned actress Tara D'Souza. In the film, Tara will be seen opposite Ali Zafar as the second lead. It has also been revealed that this swimsuit model will portray a glamorous character in the movie.
In the past, this cover girl has also written and sung a musical piece for a TV commercial for a women's deodorant.