Star Plus and Rajan Shahi's Sapna Babul Ka.. Bidaai is reaching its anti-climax as regards to the mystery clouding the reason behind Dadaji's death, and Alekh's troubled past. 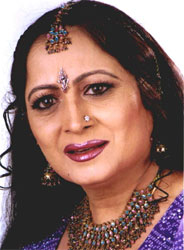 Featured Video
The present track has Ranveer (Kinshuk Mahajan) and Sadhana (Sara Khan) moving ahead in their mission by catching hold of each and every clue they have been getting. One such clue will ultimately lead them to Indrajeet Rajvansh's (Avinash Wadhawan) Bua, who will enter the story line as the very important person who has all answers to the questions raised by Ranveer and Sadhana.

According to our source, "The role of the Bua will be played by Sulekshna Sekhri who was earlier seen playing the role of Teji Nani in Star Plus' Grihasti. The lady has an important yet lovable role to play, and she will be a precursor to solving the entire mystery".

We called actress Sulkeshna who confirmed the news and said, "Yes, I am going to play a Bua's character in the show. It is a very interesting character. However, I cannot reveal anything on the track. You need to wait and watch".

We tried calling Producer Rajan Shahi, but he remained unavailable for comments.

The coming episodes, as reported by Telly Buzz will see Ranveer and Ragini's reunion, which will be followed by the big revelation that will happen in the Rajvansh family.

+ 3
13 years ago when will this sick show, cheating viewers with repetitions end? I am sick of everyone in the show. This show is dragging and dead. Bury it or burn it.

FizzB 13 years ago Not interested in the show at all but was a fan before... the show was interesting in the beginning n during ragveer's wedding n all.. but nowadays the story makes no sense to me.neways i think the culprit will be chhoti maa's husband not aalekh's dad...

13 years ago not interested anymore they ruine the show

13 years ago realy nowadays i dont watch it infact pavitra rishta is far far better ;anyways best of luck 2 biddai & i think the culprit might be alekhs father

13 years ago I hope the mystery turns out to be interesting....and this track is over soon.

13 years ago Excited to hear that RagVir will be in the same frame after ages.....and also for some romantic moments..just hope they don't drag this msytery track forever...

13 years ago i hope dey dun spoil d show by revealing tt d bua is d one who is responsible for d dadaji death!! it shud be some 1 we know frm b4 ..!