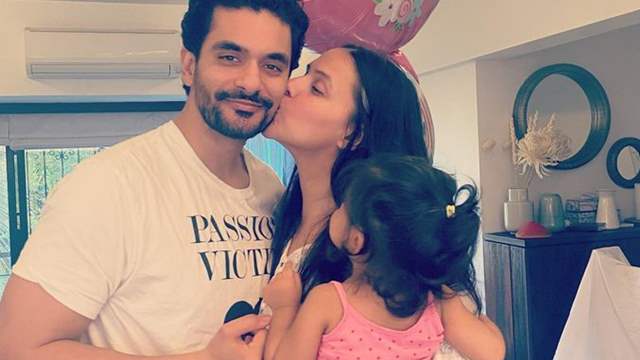 Neha Dhupia and long-time boyfriend Angad Bedi tied the knot in May 2018 in an intimate ceremony at a Gurudwara in Delhi. The couple became parents to a beautiful baby girl, Mehr, in November in the same year.

While the couple has shared several pictures with their daughter on social media, they have made sure to cover her face and not reveal it in the media even after two years.

In a recent interview, Angad unveils the reason behind the same and says that they, as parents are only trying to protect their baby. Speaking to IANS, the actor says that they often get requests from fans to see Mehr’s picture. He says:

“She is two right now and may be when she is five or six years old, she will ask us why we are not putting her picture out. That can be asked to us. We just want to secure her and if in future she is comfortable with having her imagery out, we are no one to question that. Till the time she is okay with it, we would like to protect her.”

Angad adds that they want to keep their daughter away from the pressure of being impressionable, however, he adds that when Mehra grows up, it will be her call to take.

At the same time, the actor states that he understands that the media culture is a part of being in the movie business. Angad says:

"I think you have to protect your family, which I try and do to the best of my ability but we have to also understand that we are part of a celebrated profession, which is going to be bound by media scrutiny. I feel if we are okay with positivity, we should also be okay with this aspect too, which at a lot of level Neha and I are. We are just trying to protect her till the time she builds her own understanding. The day she starts understanding, we will not have a problem."

On the work front, Angad Bedi has been a part of films like "Pink", "Soorma" and "The Zoya Factor" and was last seen in the 2020 film “Gunjan Saxena: The Kargil Girl” starring Janhvi Kapoor in the lead role.