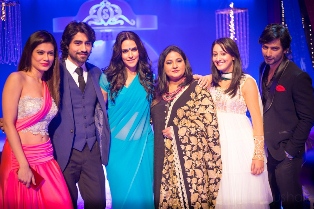 The beautiful and talented Neha Dhupia has made many a hearts flutter with her looks and performances but now the actress is all set to scorch the small screen with a breath-taking performance on Sony Entertainment Television's Humsafars.

The show which has a fashion show lined up as a part of its sequence, will see the gorgeous actress perform a song track Ghoor ghoor ke' from her upcoming movie 'Ekkees Topon Ki Salaami'.

Dressed in a blue saree like her idol Sridevi from Mr. India, the actress floored everyone with her dance moves. Neha, who had visited the sets of Humsafars to promote her movie, was also seen having a gala time with the cast of the show, Harshad Chopra, Shivya Pathania, Sehban Azim , Vibha Chhibber and Payal Rohatgi.

minaz296 6 years ago Wish you all the best Harshad Chopra..keep rocking

.HarshRutu. 6 years ago Harshad is the best...
Loving him as Sahir