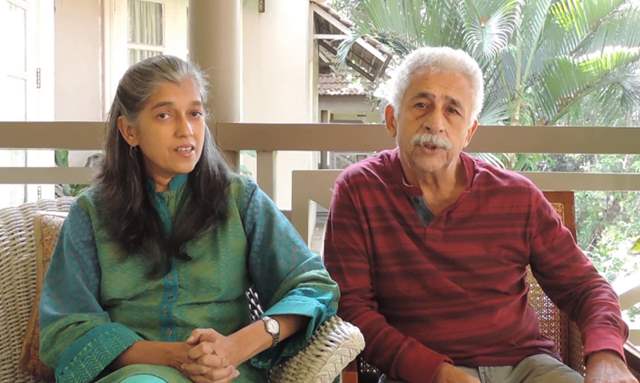 Earlier today, several reports suggested veteran actor Naseeruddin Shah was admitted to the hospital. The actor was reportedly diagnosed with pneumonia and is currently undergoing treatment at a hospital in Khar, Mumbai.

The actor’s knocking the hospital doors spread concerns across the entire film industry and Shah’s fans have been worried about his well being. However, his condition seems to be stable and he is already on a road to recovery, confirmed Naseer ji’s wife, Ratna Pathak Shah.

She informed of his well-being and told SpotboyE, “It’s just a small pneumonia patch that is being checked and treated at the hospital. He should be out soon.”

On the other hand, the Masoom actor’s manager also shared an update on the actor’s health to a leading daily confirming the same, and stated that Naseeruddin Shah was under medical supervision as it became necessary for him to be hospitalised immediately after a pneumonia patch was found in his lungs.

The manager further added that Naseer ji is responding well to the treatment and his condition is stable. He is on his way to recovery.

In a career span of over four decades, Naseeruddin Shah has won three National Film Awards and was last seen in the 2020 drama Mee Raqsam and before that in the acclaimed Amazon Prime Video's web-series Bandish Bandits.

The 71-year-old actor is best-known for his performances in critically-acclaimed films such as Masoom, Sarfarosh, Iqbal, A Wednesday, Monsoon Wedding and Maqbool, to name a few. He has also featured in several international projects like Such A Long Journey, The Great New Wonderful and Mango Dreams.

Naseeruddin Shah won his first National Award in 1979 for his role in Sparsh. His second award was for his performance in the 1984 film Paar and the actor's 2005 film Iqbal fetched him his third National Award.

2 months ago Hope that he recovers soon