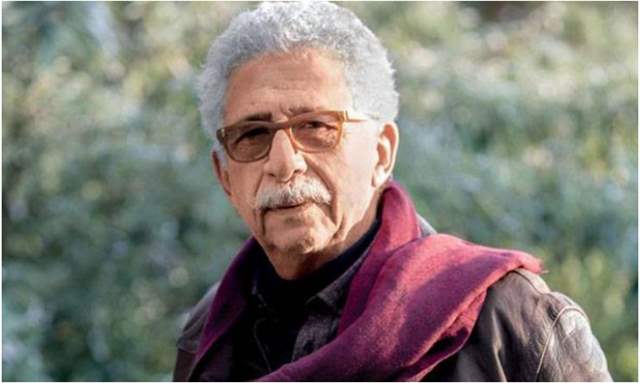 Sushant Singh Rajput’s sad demise was a shocking blow to the entire nation. Many celebrities are mourning the death of the late actor, however, some are also irked by the drama and controversy revolving around his death.

In a recent interaction with Naseeruddin Shah addressed the same and mentioned that the conversation around late actor Sushant Singh Rajput’s death in June is ‘absolutely sickening’ and that some people have been using the tragedy to voice their frustrations with the film industry. Furthermore, he also quipped about the ‘Insider vs Outside’ debate calling it, “Bulls***.”

Talking about Sushant he said, “It is absolutely sickening. I have not followed it. I felt deeply grieved when the young man died. I did not know him but he had a bright future and it was a waste of life. But I did not bother to follow the nonsense that’s being spouted by a whole lot of people. Every person who has any little frustration in his mind, in his heart, about the commercial industry, has been vomiting it out to the press. It is absolutely disgusting. I mean, keep these complaints to yourself, no one is interested."

The veteran actor in his interview with the India Today Television made a sly remark and slammed the Queen actress. To everyone’s surprise, it seems he secretly took a dig at Kangana for using Sushant's death as her medium to remove 'frustrations' with the film industry.

No one is interested in the opinions of some half-educated starlet who decides to take it upon herself to, you know, get justice for Sushant. If there is justice that needs to be done, I think we need to have faith in the process of the law and if it is none of our business, I think we should not concern ourselves with it.

Speaking about the ‘Insider vs Outside’ he added, “I don’t understand this insider-outsider nonsense that’s going on. I mean, it’s a whole lot of rubbish and we should be put an end to this, it’s bulls***. Why would not I, who have had a secure happy life as an actor, encourage my son to go into the same profession? Would not an industrialist do it, would not a lawyer do it, would not a doctor not do it? Would not anybody do it? You mean to say that Nusrat Fateh Ali Khan’s descendants should not have become singers?"

In a previous interview, Kangana targeted the existence of movie mafias in Bollywood and how they ruined her financial prospects, made her a social pariah, killed all her chances of getting married, and also tried to destroy her career.

However, Shah concluded dismissing the existence of 'movie mafia' by saying that he hasn't felt any kind of obstacle in getting the work he deserved.

“This is all a concoction of certain imaginative minds, ‘the mafia in the industry’. Naturally, I’ll give preference to people I like and the people who I work well with. If they also happen to be famous, or they happen to be the children of famous people, how the hell is it their fault? There is no mafia. I have not ever felt any obstacle to my work. I’ve made very slow progress over the last 40-45 years in my profession, but I’ve never felt that there’s some obstacle that is preventing me from getting to where I deserve,” said the Wednesday actor.

Meanwhile, on the work front, Naseeruddin was last seen in the Amazon Prime Video series Bandish Bandits. In a career span of over four decades, he has performed some of the most extravagant and socially relatable characters. He has been awarded the Padma Shri and Padma Bhushan for his contribution to Indian cinema, is also a three-time National Award winner.

Needblessings 2 months ago respected Nasir Sir, Thank you for your unbiased views.you were an outsider.you are a terrific artist , your wife also an outsider and extremely talented artist. you bot but still you ruled, proved yourselves, and survived in the industry. actually don't fit the typical Bollywood parameters but still people loved you and your works. I respect your views. Secondly Sir, never take this lady Kangna seriously. she completely lost it and needs help. She is frustrated because she tried her best to use SSR death to the core to settle down her own agenda . She is a bitter, lonely woman who actually did all the wrong things in the past to establish herself in the industry. But now she suddenly became all-mighty highness. Wish you a very long , healthy life.

lkd48 2 months ago So we shouldnt raise our voices or even say anything when we can clearly see that the people who are supposed to give justice are the ones who are hiding facts and evidences. Kangana was right to point out the mafia angle and it is a well known fact that there is movie mafia. And yes there is nothing wrong in actors encouraging their children to become actors but there is everything wrong in when you dont allow real talents who have worked really hard to strive....they are openly buying awards for such less deserving roles, how do u explain that?????.....I mean the lobbying against sushant is so apparent and thats what has angered most people......and would he have the same opinion if it was ranbir or varun who was killed instead of sushant? It seems like nobody cares about his death because he is an outsider.. its so sad.

ishan2003 2 months ago That makes so much sense. The public really need to read this.

BeyondHorizon 2 months ago Finally! Something that makes total sense!