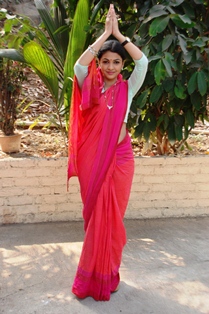 Coming from a non - political background, Nandini got married into a political family and now will be seen in a completely new avatar, that of a politician.

After being impressed by Nandini, the all women members of the Pooran Rashtra Prapti decide to vote for Nandini as their next president. After much deliberation, Gayatri devi will be seen announcing Nandini as the new president of their political party.

This political movement would see Nandini dawn a completely new avatar. Dressed in a sari and a simple blouse, Nandini will take over the reins of the party and start writing a new chapter in her life.

-Serene.Rose- 6 years ago keerthi is doing fab! Rafi n other cast too! Wish they bring some more interesting tracks.. all the best :)

d.padmini 6 years ago though she looks too cute, too adorable, too young to be a politician, but loved her in her new look

divya.d 6 years ago keerti you are doing Wonderful job as Nandini... Show getting intresting with Nandini joining politics... Looking forward for Nandini's new journey as polition... ALL THE BEST ...

tharasach 6 years ago All the best Keerti Nagpure!! You are playing the character really well.

olivia7 6 years ago Thanks for the article. Nandini's new
journey.

norzar 6 years ago thanks for the article

Kangana Ranaut is in Awe of Yogi Adityanath; Applauds his ...
2 minutes ago

Farhan Akhtar is excited to kick-off the opening match of ...
9 minutes ago

Arjun Bijlani on music video with Reem Shaikh: I feel Ishq ...
29 minutes ago