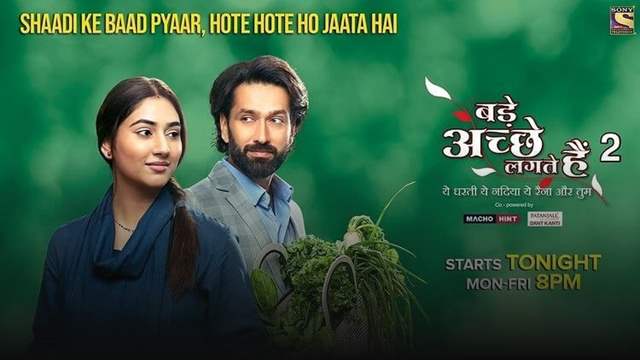 Vedu and Ram have an emotional moment, and we see how the former talks about not having the ability to love ever again. There's a lot of emphasis on the first rain of second year, and that's where the story then resumes. It is then that we see that this is Ram's sister's wedding they are talking about. Ram is a workaholic and a family person, but he is kiddish and also loves monsoon. We are then shown how Priya is a contrast of Ram, right from not liking rains, to being someone who is practical. Honestly, her description of monsoons is truly one of my favourites, but that is something for later.

The first episode is brief and gives us newer perspectives about Ram and Priya, however, it also leaves you wanting for more.

Nakuul as Ram is probably the best casting that there could be for a cult story being told in contemporary times. He checks all of the boxes that one would expect as far as the character and acting are concerned. So far, he is a well-written and well-done bit of the show. Disha, also manages to impress us with her acting skills and this is a reminder to fans as to why have they missed her all this time. It is very easy for her character to become one which isn't likable in the beginning, but it is her convincing act that makes sense.

Apart from the two, we see a bit of Ajay as Ram's best friend Adi, and that is a good addition to the show. Pranav returns to the screens as Disha's brother Akshay, and that is also a convincing act that he has put, especially when we are shown more of the temperament of the character. We are introduced to Aanchal Khurrana and some more characters here and there, but there should be more on that later.

I like the vibe of the show right from the start. With some songs and quite an interesting backdrop, you want to see more of what happens. There are instances in the show that are dramatic but keep you hooked and that is a job well done. The dialogues leave you smiling from time to time. Some of my favourites include - 'Baarish unhe achi lagti hai jinhe unme utarna nahi padta', 'Iss toofan me ek kashti akeli hi ghumegi, mast maula ban kar', 'Baarish ke darr se, ghar ka rasta nahi bhulte hai'.  Elements of humour also keep you hooked, especially the bond between Ram and his best friend.

They try to diss the cliche around 32 and unhappy, briefly though. One might want to infuse some love and light, but then when she speaks, they kind of make sense, and good writing is a huge reason for the same. The writing must be given due credit as it seems impressive, especially for the current day and age.

In a mere 20 handful minutes, it is rather difficult to specify what you dislike about the show, but there were bits that seemed to be rushed. While that is not something that sits well with the format of television shows, it kind of only makes sense, at least in the beginning. So not complaining yet, but maybe we could use some more time for the show to settle down and let its viewers settled down as well.

Well, I think I am watching this show for the vibe check that it is. If you are a romantic at heart, you will love the show at its very face-value, and even if you are a not so romantic person, there might be bits of the show, that will resonate with you.

+ 2
1 months ago Second epi was again wonderful.. Nakuul and Disha are rocking in their respective roles..The show has such a nice vibe .. Really enjoying it!

1 months ago I really like the first episode.... hope it remain same and ekta doesn't destroy the story in future

+ 2
1 months ago First epi was freaking awesome! Expectations from the show just sky-rocketed <3