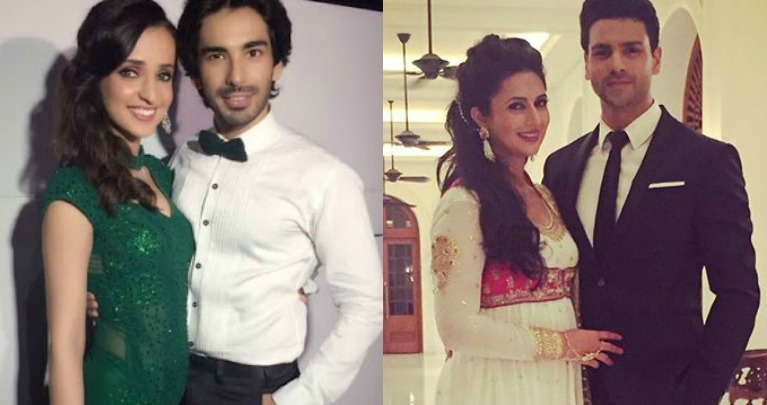 Star Plus' celebrity couple dance reality show, Nach Baliye 8 seems to be encompassed with controversies off lately. It all started with Divaynka Tripathi - Vivek Dahiya and Mohit Sehgal - Sanaya Irani qualifying for the finale.
The fans of both the couples have been on their feet to make their favourite jodi win. The fight went a little too far when there were news of Sanaya - Mohit fans reporting the fan pages of Divyanka and Vivek.
Later on, Divyanka was dragged into the news for apparently threatening the channel to make the duo win or else, she would quit her show 'Yeh Hai Mohabbatein'. However, she put the rumours to rest later on.
(Read: http://www.india-forums.com/tellybuzz/buzzin-hot/39676-divyanka-tripathi-responds-on-threatening-star-plus-to-quit-yeh.htm )
And now, it is Mohit - Sanaya at the receiving end of all the backlash. Rumours have it that the duo is being given their own amount of leverage and that they are allowed to take multiple takes for their final act. A "so-called" official handle of Nach Baliye on Instagram put across the news in the following manner: 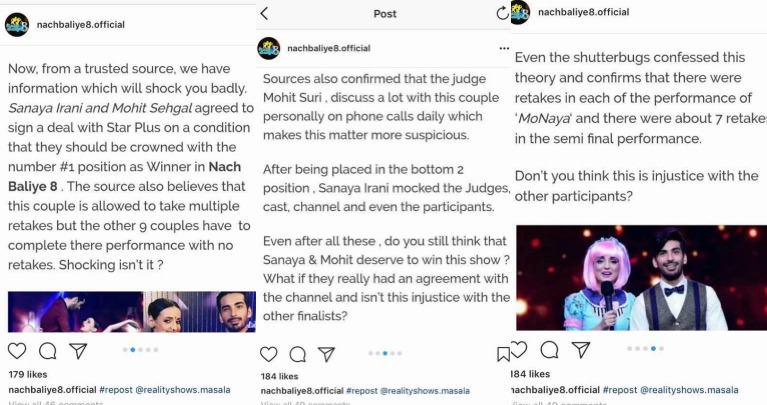 Following this, the duo took to their Instagram accounts and clarified their stance. Here's what they said:
Having said that more than clearly, Sanaya also put up a video requesting her fans to not bash the other couples because that isn't what they want.

Well, all we'd like to say is may the best couple win! We wish all the three finalists all the very best for the finale.
22 Likes

arezoo.sabti 1 years ago Sanaya Irani i really like her role and d way u present

90210khadija 3 years ago Sanaya Irani!
What the!
Good for Sanaya Irani for putting the whiners in their place!
She should also sue them for slander!
The other couple should use this time to spruce up on their act instead of mallaligning the contestents! !!
#GoWinMonaya!

sammy17 3 years ago I've never seen a comment section so full of immature people before. Some people are claiming that divyanka and vivek are the trouble makers because sanaya has been on a reality show before and she didn't have these problems, so according to these people that proves that divek are trying to defame sanaya and mohit, and then you have people making futile accusations on sanaya and mohit as well. What the hell is wrong with you fans. None of these couples are trying to defame one another, and neither one of them deserve hate. All this drama is being stirred up and created by the media, who create false stories solely because they have too many slow news days, and the channel also benefits from controversy. Stop pathetically accusing these celebs of trying to manipulate and defame something or someone, when it is the media creating rumours. Have some maturity people. And shame on the people commenting such horrible things about divyanka in relation to her past relationship with sharad. All of you should be ashamed of throwing hate at these celebs because of rumours created by the media. Just enjoy the show instead of bullying celebs.

Hyacinthus 3 years ago Sanaya Irani
Love you !
I wish you happiness and success in your personal and professional life. Keep smiling always!

kbtr 3 years ago Sanaya Irani!
#GoWinMonaya!
You should win if SP plays it straight.
Trophy or not, you already are a winner - with your true sportsmanship and great attitude you have shown that a competition needs true effort to win.

llsujill 3 years ago Sanaya Irani.. You deserve to win.. Waiting for the weekend

Hyacinthus 3 years ago Supporting you Sanaya Irani, love your acting and dancing.