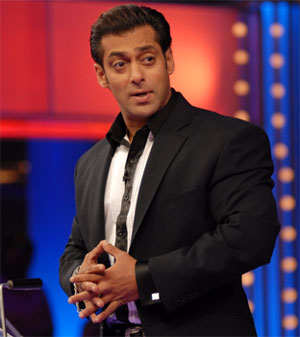 Featured Video
Ask the actor why he chose to anchor Dus ka Dum and he will say, “This show does not embarrass you or your intelligence. It doesn't require you to be knowledgeable. You just have to estimate how the rest of the country thinks. Normally, in a game show or a quiz show, the contestant might know the answer but since he or she is nervous before the camera might goof up and the people sitting at home think, 'Omigod, itna bhi pata nahin isko'. That won't happen on our show. No one will feel awkward or embarrassed about losing. It's a fun show. The contestants I have shot so far with have been unbelievable. They are super excited and sometimes they ask me a whole lot of questions than I do”. (rolls his eyes). He says the only worst part of shooting for this show, are “the terrible working hours. I'm just not used to it”.

How important is money to him considering the contestants move from 10,000 to 10 crores in just five questions? “Money is very, very important. Money can buy you food, it can buy you home and it certainly can buy you love. It does, definitely. What do parents look for in a boy? Looks, a nice family background, a secure job and a decent bank balance, right? So yes, money is important”, claims the actor.

He says that when contestants lose money or slide down from a crore to 10,000, they don't feel disappointed. “Some of them say, 'Arre kya leke aaye the is duniya mein?' Just the experience of being part of the show makes them feel happy. They hug me, they dance with me and they laugh with me…all that's enough for them. It's these moments, which makes it all worthwhile”, states Sallu Bhai. When asked about the incident where a contestant came up to him with a marriage proposal, Salman grins and says, “Yes, but she was already married. Toh woh bhi haath se gayi”.

He shrugs off any questions related to his marriage… “The media knows better than me. Am I expected to give an official statement whether I'm married or not?” Ask him about his not-very-beautiful relationship with the media while he comes across as very loving and affectionate towards his fans and he says, “It's not that I hate the media. Also there is no reason why I should not say what I feel… Who should I be scared of? If I tell someone I don't like you so stay away, am I being rude? No, I'm just being frank. There is a thin line between being rude and being frank”, argues Salman.

Tell him that his show will be compared to Shah Rukh Khan's Kya Aap Paanchvi Pass Se Tez Hain and he says with a smile, “No need at all. Our shows are very different. Mine is better”. What about SRK giving him tips to host? He laughs loudly and says, “Shah Rukh is a great friend. He won't give me tips and I won't take them”.

Well, talking about his films lastly, Salman’s forthcoming films include God Tussi Great Ho, Yuvraj, Hello, London Dreams. Will he do more television? “Nahin ji, itna kaafi hai. I want to go back to my acting”. Finally what did he discover about himself having shot for the show? “That I am a great guy”…

14 years ago sallu rocks!!
n ash; huh she ran afta salman to make a place for herself in the industry, then dropped him like a hot potato once she got wat she wanted! then she got with vivek who seemed like the next big thing, then when his career graph started going downslope, she left him in no time! then she got wid abhishek, n when she was sure tht he is getting popular by the day n his movies r getting hit, she married him!!! :S:S:S:S:S:S

14 years ago i disagree....ppl always want to see ash in a negative light...i dont think she married abhishek for money...she had enough already...i think they are made for each other.

personally iff you ask me to choose between KAPPSTH and DKD..i would choose DKD =D

14 years ago Lols when i read the name of teh article i thought he was insulting sharukh khan :O

14 years ago I find this ridiculous that he said money can buy you love...its written in the second paragraph...I find that just horrible...money doesn't buy love.
Anyways,I think the show will be funny and interesting to watch.