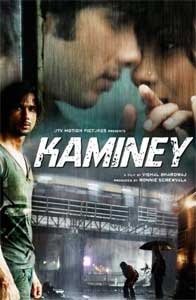 Bollywood actor Saif Ali Khan says it is 'ridiculous' to think that his mother and censor board chief Sharmila Tagore gave an 'adult' rating to 'Kaminey' because it starred Shahid Kapoor.

'It is ridiculous to state that anyone had any personal bias against 'Kaminey',' Saif told IANS even as his own movie 'Kurbaan' is about to release Friday with an A certificate.

'I know for sure that my mother is a great authority when it comes to the censors. My own 'Kurbaan' has got an 'A' certificate and I know where she is coming from.'

It was insinuated that Vishal Bharadwaj's 'Kaminey' was given an A rating - restricting viewership - as its lead actor Shahid was once in a relationship with Saif's girlfriend Kareena Kapoor.

But Saif said: 'Any talk of personal enmity are completely fictional. I don't even know the actual people involved who spread such rumours and frankly I don't care. Such things don't even enter my radar.'

'It's really rubbish if some people feel so. 'Kurbaan' getting an 'A' certificate is hardly a fitting reply. It's a sad state of affairs when people start speculating about everything and anything. As someone who has been part of the industry for long, I don't take such things seriously,' Saif told IANS.

As for 'Kaminey', he said: 'I think Vishal (Bharadwaj) is a wonderful filmmaker and I liked everyone's performance in the film.' Saif himself came up with an award-winning act of Langda Tyagi in Bharadwaj's 'Omkara'.

Is it really easy to be oblivious to all talk that his mother may have shown bias?

'I hear a lot of things in the 24 hours that I have in a day. This is why I just chuck out whatever is irrelevant. I don't quite get into the 'why' and 'where' of affairs till it is absolutely warranted.

'I know one has to live with all the negativity around; after all it's human nature to gossip and speculate. Guess what? Some people think that even Elvis (Presley) is alive today. So conspiracy theories will always remain,' he said.

'Kaminey' also got an 'A' certificate because of its dark and violent content.

Has he ever spoken to Sharmila about the A certificates for 'Kurbaan' or 'Kaminey'?

'No, I don't talk about any particular movie per se but I do know of her general views and opinions when it comes to censoring a film,' said Saif.

'She doesn't have any problems with anything shown on screen. But, yes, she has problems with things that are shown to children. She will ban something if there is something which is inflammatory.

'Of course, she is the right judge of things and may be I don't know everything that she looks at in a movie during censoring. What I know for sure is that she is a good mother and follows the same caring attitude when it comes to censorship as well,' said Saif.