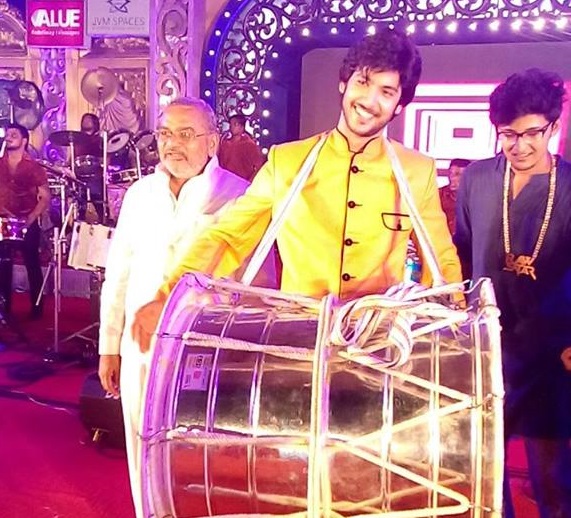 As we can see the 'Garba fever' around us, it has gripped over our television stars as well. Our television stars are gracing the Navratra events with their presence and they make it even more special by grooving on the tunes of Garba songs and they are enjoying it as well.

The good looking and popular actor Shivin Narang, who plays the character of Ranvi in Star Plus popular show Veera attended a Garba event organized by the channel and he had a gala time over there. Shivin was elated as he played Garba for the first time and had will cherish the memories of playing it forever.

Sharing his experience with TellyBuzz Shivin says, "I didn't know that I have to go there and I got a call from the channel suddenly that I have to go for the event. I was surprised and excited as it was for the first time that I was attending any Garba event and playing Garba. There was a huge crowd and I was so surprised to see the people of all age groups dancing with full energy and I could see unity in diversity during the event. I received a warm response by the people and learned a few steps of Garba from them as well. It was a rocking experience for me. Darshan from India's Raw Star joined me there too and even he taught me a few steps of Garba as he is a Gujarati. I felt so good to be a part of it."

We further asked Shivin about his Navratri plans. He shared, "I was fasting on the very first day of Navratri and will be fasting on the last day too. My Mom doesn't allow me to fast for all the nine days as she isn't here and fears that I will fall sick. I used to fast for all nine days when I was in Delhi. On the last day, I will call nine little girls at my home and feed them food and I have been doing this since last two years."

Shivin, who enjoyed her first Garba event so much, we asked him whether he is going to attend some more further. He said, "I have got many other invitations for Garba events and I want to go but we are shooting cut to cut so if I will get an off then I will go for it."

krupaa 6 years ago Saw you playing garba Shivin Narang
And not bad you played very well for yhe first time.
Keep it up

burnnotice 9 years ago Always admired Karisma for her beauty and humility! Looking forward to the movie!

chammak_challo 9 years ago I have always liked Karishma...She is just dazzling as ever...:)

vaish316 9 years ago she definitely doesnt look like a mother of 2!!

Ragz2009 9 years ago She looks hot. Cant wait to see her. No offense to Bebo fans but I always think Lolo rocks...Bebo cant even come close to her

ALUJNA21 9 years ago wow looking stunning gorgeous fresh and not her age neither mom of two little kids just perfect.