Tusshar Kapoor says his recent argument with sister Ekta Kapoor over the publicity campaign of their situational comedy 'C Kkompany' has been exaggerated.

Tusshar designed the publicity campaign for the film, but Ekta rejected it. This led to a heated argument between the two and they did not speak to each other for two days.

'It was just a brother-sister kind of cold war that has been hyped. Yes, we did not speak with each other for a day or two but we don't carry our fights for long,' Tusshar told IANS over phone from Mumbai.

The matter was sorted out after Tusshar agreed to incorporate some of Ekta's suggestions in the campaign.

'It was just an argument but later on we both agreed and came to a common consensus,' the actor said. 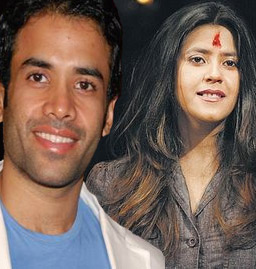 Featured Video
Tusshar is usually referred to as either Jeetendra's son or Ekta's brother.

Asked whether this gave him an identity crisis, he said: 'I don't really look at it that way. I am an actor and I have made my own mark. My name in being associated with my father or sister doesn't affect me at all. It would have if I were not successful. I'm quite happy with the way my career is shaping up. I'm learning every day and I have no regrets.'

Also, there have been comparisons drawn between brother and sister regarding their success quotient.

But Tusshar said, 'There is no question of comparison between Ekta and me. I'm an actor and she is a producer and both of us belong to different mediums professionally.'

He will now be seen romancing Raima Sen in 'C Kkompany' that releases Aug 22.

'Raima plays my girlfriend in the film and a gangster's sister. I'm in love with her. It becomes an awkward situation where my character (a crime reporter) faces trouble in getting married to a gangster's sister,' Tusshar revealed.

Made under Balaji Motion Pictures, 'C Kkompany' is the directorial debut of Sachin Yardi, who wrote 'Kya Kool Hain Hum' and 'Traffic Signal'.

Apart from Tusshar and Raima, the film also stars Anupam Kher and Rajpal Yadav in pivotal roles along with Mithun Chakraborty.

It is the story about three middle class friends who are in need of money and decide to play a prank, which goes awry. And co-producer Ekta makes a small appearance in the movie.

So is sister Ekta finally stepping into the realm of acting?

'She is not interested in acting. That is her professional choice. She is more on the creative side behind the camera, which is a personal choice,' said Tusshar.