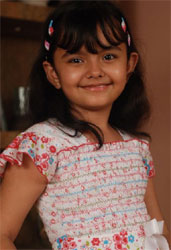 TellyBuzz had earlier reported that Aditya Lakhia, Sangeeta Kapure and Rakesh Pandey play pivotal roles in the show. We had also reported that the new love story of Dev (Avinash Sachdev) and Radhika (Rubina Dilaik) will blossom from their childhood days.

The channel and production house were on the lookout for an impressive face to play the small Radhika, and have now zeroed in on Muskaan Uppal. The girl is presently seen playing the role of Meethi in Star Plus' Sasural Genda Phool.

We called Muskaan Uppal's mother to get a confirmation, but she refused to comment.

However, our source confirmed that Muskaan has already started shooting for Chhoti Bahu. The boy to play Dev's younger version has not been finalized yet. The leap is  expected to take place after the initial 10-15 episodes..

Chhoti Bahu will be launching on February 15th and will take its original slot of 7.30 PM. With this, Swastik Pictures' Agle Janam Mohe Bitiya Hi Kijo will be winding up on February 10th.

The channel apparently is planning a curtain raiser for the Second Season of their one-time flagship show, Chhoti Bahu..

-Rimsha-sizzles 8 years ago You are sooo cute muskaan love u sooo... much

sinharuby 9 years ago CHOTI BAHU IS THE BEST..AND I LOVED THE STORY.......

viprakshi 9 years ago VERY CUTE LITTLE DEV AND RADHIKA..AND THEY DID GR8 WORK IN CHOTI BAHU..AND ENJOYING THE SHOW CHOTI BAHU SO MUCH...........

Avina_Love4ever 9 years ago very cute &nice both our little RADEV. ...their acting is good...

chymanju7 9 years ago waiting eagerly for cb-2......love u both avina

anusha34 9 years ago Waiting to see Muskaan as little Radhika. she is cute!!

chymanju7 9 years ago we love u both Avina...u both r the best

hikma 9 years ago I am so glad that chotti bahu will be back soon wow can't wait. cause I love radhika and dev.