Another week of highs and lows in the musical arena of reality shows. While some shows gave the viewers a great musical time, some stood out like the sore thumb. Mission Ustaad as usual was top class. K for Kishore was a pleasant surprise and L’il Champs seemed energized doing full justice to the chosen themes. “Musical reality show” or a “Dramatic musical show”, that was the feeling left with most viewers after watching Friday’s episode of SVOI. 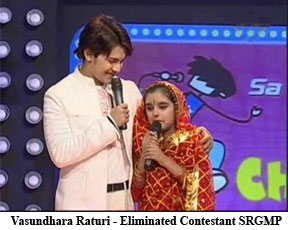 SaReGaMaPa on Friday saw one of the best episodes with all the contestants giving out good performances on Bhakti Songs. The saddest part was to watch Vasundhara’s elimination, a very fair decision by the public. But it was nice to see the positive way that this girl took the decision and ended her journey on SaReGaMaPa show with the good bye song “Naam Ghum Jayega” bringing tears into everyone’s eyes. Saturday was an episode which could be called a child’s delight. Raju Srivastav being the guest brought a lot of fun factor into the show. But the show producers went bit overboard with Raju and his jokes, which in the later stages turned more distraction to the actual music. 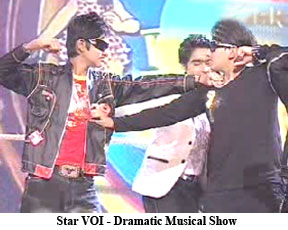 VOI for the second week in running went for drama and this week it could be said that Friday’s episode was one of the worst ones. The opening itself was wrong. This is a kids show and showing a muqabla as if it is a boxing match – now does that send out a positive message to the Lil participants or could that spread animosity against the challenger? All that hype about “the Challengers” fizzled out even before the episode got over. None of them including Rigveda, the challenger who made it, was anywhere close to the remaining contestants. The appeal for “Wild card” looked abysmally scripted. Show producer portraying himself to agree for wild card by honoring the pressure put forth by the judges and the participants looked more scripted, especially when everyone already knew about such a round. On Saturday, the wild card entries were better than the challengers! Gitasree, Areeb and Alpansh gave some good performances. So how many wild cards now make the entry - one or two? That part is yet to be cleared for the viewers. 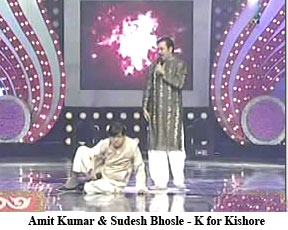 K for Kishore was the surprise package for the viewers this week. The theme this week was Comedy round and Chetan, Nayan, Chintan and Arnab all gave out flawless performances. Sudesh Bhosle was correct in commenting about Chetan Rana’s rendition of “Aake seedhi lagi” that his performance at places gave the impression that it was the original track. Amit Kumar and Sudesh Bhosle’s performance on Saturday on the song “Ek Chatur Naar” was awesome. From what the hosts commented looks like the show will soon have few more contestants added as “Challengers”. The manner in which the show is treading, it is giving an impression that the show lacks any fixed format. 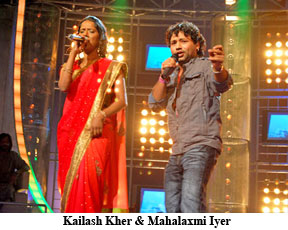 Mission Ustaad has reached the last stages of the show. This week the theme was “Sharing and spreading love”. Though the Jodi’s gave some very good performances, they were chided by Javed Saab for not singing songs befitting the “love” of the theme. The highlight was the impact this scolding had on the participants and the way all the participants led by Naresh & Shweta came forward to sing “Jeena Isi Ka Naam Hain” to placate the judges. The way the judges gave them a public ovation surely is what makes this show “class apart”. It was very tastefully done and was truly a musical retort instead of any staged drama prevalent in other shows! Javed Saab’s comment that there are many musical competitions, but this one is a musical cooperation was indeed so true. Every performance was good but the best was the song compositions in the Brahmastra round where Kailash Kher - Mahalaxmi Iyer were declared the winners.

If on one side we have Mission Ustaad building hope, then on the other side we have SVOI Chhote Ustaad shredding hopes. The participants of the show are very good and just their singing alone was a reason for music lovers to tune in. But the Challenger’s challenge drama or the wild card confusion may see many of its loyal fans walking out now and boycotting the show. A gimmick can work once, but repeatedly? It’s doubtful.

*Jaya* 12 years ago This week - I really liked the Friday episode of Lil Champs... Though the sets and all were overdone, but the kids gave some very good performances... Really loved Anamika's singing... This girl has come back with a bang and gave out a heart-felt performance after weeks.. Hers 'Satyam Shivam Sundaram' was probably her best so far... Also liked Rohan's performance quite a lot... I thought Amir and Tanmay dissapointed! But the Saturday episode of the same was as irritating as ever! Raju Srivastava was a complete turn off.. the performances were also mediocre...

Chhote Ustaads probably had the lowest week in terms of performance.. Friday - all performed below par on Acid Test... In Challenger round, Rigveda stood out from the rest, but can he actually challenge the extremely talented top 4, dont think so! The wild card round was better... Alpansh, Giteashree and Areeb were very good... I hope Areeb makes it, because I personally think - the other 2 will not be able to give that fight that Areeb can.. but looking at the fact that its all junta deciding - the comeback for Prakriti almost looks sure!!

sjshah 12 years ago OMG Lil champs was horrible on Saturday!!! None of the singers sang well and Raju Srivastav was super annoying. I don't see why they had to invite him???? Even Suresh Wadkar looked bored and Sonu Nigam was just pretending to laugh! It was one of the worst episodes I had seen by far

SVOI was way better on Sat than on friday. And I think it was a good idea to bring back the eliminated contestants. It was an awesome show on Saturday - They made up for the friday mishap!

**Sanchita** 12 years ago hey! come on..raju was the best..his jokes were as funny..i hate SVOI..it's getting worse every week..love li'l champs!

advil 12 years ago L'il Champ - The devotional round was simply divine ! the ambience, the songs, the perfromances all added up to make the show soothing and enjoyable. Vasundhara's elimination was timely and she indeed left the show with a touching sign off. Hats off to the mother-daughter jodi !Raju Shrivastav - really the worst judge!In front of him Vyshali seems like a shy kid! How much he talks !

SVOI - Now what was that? The challengers wouldn't match up to even the eliminated contestants, leave alone the remaining ones. Alpansh, Gitashree and Areeb were good.

Gajendra Singh should be ashamed that he made the kids enact such scripts! Its totally deplorable ! when it was already out in the media that tehre would be a wild round, then why this weird drama! It was really shameful.

Mission UStaad was mindblowing! The way the judges comments are respected and that too by such established singers is really heartwarming.They all gave fantastic perfromances.Totally enjoyed the show.

K for Kishore was also totally entertaining. Even I dont understand their format, but so long I get to hear some of Kishoreda's gems and that too sung well I am not complaining.

Bhaskar.T 12 years ago Raju Srivastav!!!!!!!! He got on my nerves when we reached the ghost round. He was toooo irritating.

VOI... Can't even get what to comment!!! That Gajji can stoop down to such a level that he will make even the kids tell lies is something highly deplorable.

He himself tells lies and now making these kids do the same too just for the sake of MONEY!!!!

Mission Ustaad is the best show. None can beat that show. And this week was one of the fantastic episode. The songs did not match the theme true but they were just superb. We just hope they again come back soon.

scoops 12 years ago Don't tell me no one noticed that K for Kishore singers lip-syncing for the songs. When they all were pretty average when they were standing upright and singing, you expect them to sing flawless when they are jumping around and singing. I have DVR and noticed that couple of performers forgot to move the mike along with their head when they were busily acting for the song, the mic was far away from their mouth and still we could hear the song in the same volume. I say this is plain cheating.

Anuradha 12 years ago Raju Srivastav was the worst guest till date!! I got irritated with srgmp show on saturday coz of him!!

It is better not to talk about svoi.. If I do, then i will be the one to spoil my mood!!

Mission Ustaad is a wonderful show! Love it.. Why cant the other Reality shows, learn from them.. Music is pure and that is relevant from this show alone!! I would love to own a DVD of all the episodes of MU..

neha28 12 years ago i liked the chand thing on SRGMP..but the bhoot round was a bit overdone!!!

n SVOI is goin donw the drain...itz ruining the talent on the show..the drama gets unbearable

Sidharth Malhotra got to know that Ajay Devgn is shooting nearby ...

Divyenndu to play an engineer in his next film 'Mere Desh Ki ...

Speculations come to an end as close source spills the beans ...

Pamela Anderson gets married for sixth time, hitched to her ...

Sharad Malhotra opens up on new normal in COVID-19 times, the ...