Mumbai, July 29, 2008: After enticing the minds of audiences with some melodious musical promos across channels, the music of Vijayta Film's Chamku was today launched amidst much fanfare at suburban hotel Sahara Star.

Hosted by Bhushan Kumar (CMD, T-Series) & Divya Khosla Kumar (Creative Head, T-Series) the event was livened up by the presence of the very svelte Priyanka Chopra and Bobby Deol who, after a quiet 2008 will be making a thunderous beginning with Chamku. 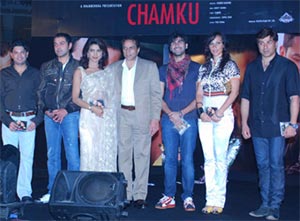 Featured Video
The function was commenced by the lively emcee Anmol who invited the music team comprising the very talented music director Monty Sharma, lyricist Sameer, lead starcast Bobby Deol & Priyanka Chopra and music baron Bhushan Kumar & Divya Khosla Kumar from T-Series. The invitees then spoke about the exceptional music of the film and their expectations from the film.

Bobby Deol then went on to invite Sunny Deol on the dais who in turn invited the veteran Dharamji to share a few words on the film.

After a few special thoughts from Dharamji, the promos of the film were played before the audience and the entire team was host to a lively music launch which followed...and captivated the hearts of everyone.

After the stupendous musical success of Saawariya, music director Monty Sharma is back with a heartfelt, moving, soulful and melodious compilation for Chamku with lyrics by Sameer. The music will be distributed & marketed by T-Series.

Commenting on the occasion, Bhushan Kumar said, "Chamku is an exceptional film and with the promos on air, there is already a buzz around the music of the film. Monty Sharma has come up with a great sound track and we are sure the numbers will be a hit with listeners."

CHAMKU is an action thriller where Bobby plays the role of Chandramohan Singh a.k.a CHAMKU, who moves from southern Bihar to Mumbai, where he gets entangled in the world of crime once again.

Chamku is set for a release this October, and with an impressive music launch like this, the film is definitely one of the most exciting films to release in 2008!