Hitting the theatres on April 21st is the movie Noor, starring Sonakshi Sinha as the principle character. The film is being produced by Bhushan Kumar, Krishan Kumar and Vikram Malhotra, and directed by Sunhil Sippy. The film is based on the Pakistani author Saba Imtiaz's novel Karachi, You're Killing Me! The movie is about Noor, a Pakistani journalist-writer who is trying to juggle her love life and career while living in Mumbai. Purab Kohli and Shibani Dandekar also star in this movie, and making his debut is the popular YouTube comedian Kanan Gill, also known for his Pretentious Movie Reviews. 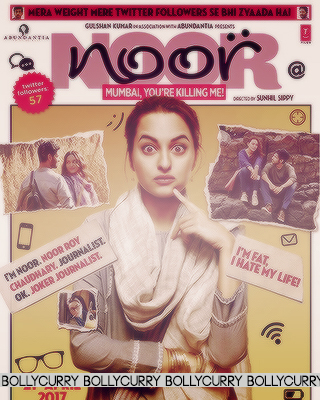 The album features five soundtracks from the composer, Amaal Mallik, and lyricists, Manoj Muntashir and Kumaar. This album is the second solo outing by Malik, after M.S. Dhoni: The Untold Story (2016). We, at BollyCurry, decided to give these songs a listen and here is what we think about it.
The album opens with a titular track "Uff Yeh Noor". This light and breezy song is sung by Armaan Malik and written by Manoj Muntashir. While the music is foot tapping and fun, the song is simply average, with nothing significantly attracting the listeners' attention. However, what makes this song moderately enjoyable is Malik's voice, who seems to be having fun.
The next song in the album is "Gulabi 2.0", sung by Amaal Mallik, Tulsi Kumar and Yash Narvekar, and composed by Kumaar. The song is the remake of the famous 70s song "Gulabi Aankhen", from the movie The Train (1970), which was composed by the legendary R.D. Burman and sung by Mohammed Rafi. Over the years, this song has been remade multiple times, Sanam's version being the most popular one, but this version just might be the worst remake in the history of remakes. Not only is the music is plain and unexciting, but the lyrics also make no sense at all. One second the singers are crooning about love and the other second they want to have fun and let go. In between all of this, a girl goes "Gulabi Aankhen Jo Teri Dekhi" leaving us to wonder what exactly the lyricist is trying to say here. Adding to this mess of a song is the rap, which, for a lack of a better explanation, is basically random words strung together to form a sentence and sung in the rap-style. As if this wasn't enough, there is a second version of this song called "Gulabi Redux", with the difference being that the latter number doesn't feature Amaal Mallik as part of the vocals, this making us question the need for the second version in the first place. Enough said, lets trudge ahead.
The third song "Jise Kehte Pyaar Hai" is yet another forgettable song. Prakriti Kakkar's voice is melodious and lyrics, by Muntashir, are decent, as well. The music is casual and fast paced. But once again, there is nothing significant, or unique, about this song attracting the viewers. It's an average song that audience will forget before the movie is even released.
"Hai Jaroori" is the fourth and the only song in the album that is well above average. After hearing the other four musical numbers, this song is definitely a treat to our ears. The lyrics, penned by Muntashir, are meaningful, deep and soulful. The music is soft, melodious and heart-touching, which melds perfectly with Kakkar's soothing voice. Kakkar is definitely a treat to listen to and the best part of the song. Overall, this is the best musical piece in the entire album.
After hearing all the songs of Noor, we are very disappointed with Amaal Mallik and the lyricists. All three of them have delivered beautiful songs in last few years, especially Mallik who gave us songs like "Naina" from Khoobsurat (2014), "O Khuda" and "Main Hoon Hero Tera" from Hero (2015), "Kaun Tujhe" from M.S. Dhoni : The Untold Story (2016) and many more. Muntashir has penned popular songs like "Teri Galiyaan" from Ek Villain (2014) and all of the songs featured in Rustom (2016), while Kumaar is famous for "Nachaange Saari Raat" from Junooniyat (2016) and "Chham Chham" from Baaghi (2016). When compared to these beautiful songs, the album is a disappointment. Hence, BollyCurry gives it the rating of 1.5 out of 5 stars. Hopefully, next time we get something better from this trio.
Noor is releasing on the 21st of April at theatres near you. If you are a fan of Sonakshi Sinha, Kanan Gill, or even Purab Kohli, be sure to book a ticket. Till then, skip the album and simply hear the music composer and lyricists' older and much better songs. BollyCurry plans to do the same.
Writer: Kalpana K.C.
Editors: Myraa S. and Mohini N.
Graphics: Amiyah R.
Have a suggestion or comment for BollyCurry? Drop us a PM at BC_Dropbox Today!
0 Likes

Millind Gaba On His First Collaboration with Tulsi Kumar and Jaani for ...

Good News for Virat Kohli - Anushka Sharma; Thanks to their ...
51 minutes ago

Check out Radhika Apte’s Timeless and Heart-winning ...
53 minutes ago

Ranveer Singh is Unstoppable; Reveals His Ambitious Plan for ...
59 minutes ago