After the success of Goliyon Ki Raas Leela - Ram Leela [2013] and 2 States [2014], Arjun Kapoor and Deepika Padukone are back to wow their fans with their latest outing, this time together in Homi Adjania's Finding Fanny. Produced by Dinesh Vijan and backed by Fox Star Studios, the movie is a bilingual satirical comedy based on the lives of 5 oddballs who are thrown into an impromptu road trip together, which was supposed to last for about an hour, but lands up taking slightly over a day.
The music of the movie has been composed by the talented French music composer Matthias Duplessly, who forays into Bollywood with Finding Fanny. The lyrics of the songs have been penned by Mukhtiyar Ali, Alan Mercer and Sachin-Jigar. The album in itself is very small, comprising of four songs, which only serve to pique the curiosity of the average listener, who's left wanting for more. 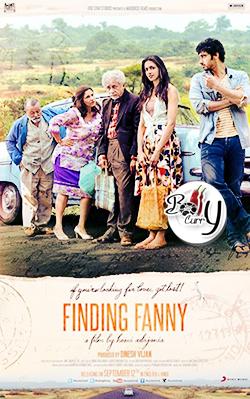 The first song in the album, "Fanny Re", has been sung and written by the talented Mukhtiyar Ali. The music of this song has been composed by Duplessly, who has also lent his voice to the song. The song in itself is extremely catchy and fun to listen to. While this is not a quintessential Goan song, the upbeat tempo and quirky lyrics only serve to make it worth listening more than once.
"Maahi Ve" is the next song in the album, which is basically another version of "Fanny Re". The only difference between the two songs is the lyrics; as "Maahi Ve" has more Punjabi lyrics fused within it, and the tagline Fanny Re has been replaced with Maahi Ve.
Next up in the album is the quirky song "Shake Your Bootiya", which has been composed and written by the talented composing duo Sachin-Jigar, famous for composing popular songs such as "Babaji Ki Booti" from Go Goa Gone [2013] and "Johnny Johnny" from Entertainment [2014]. The unique picturisation of the song, peppy beats and inane choreography makes the song a great one time listen.
The last song in the album, "Ding Dong", has been written by Duplessly's friend, Alan Mercer. The song gives a strong Goan vibe, and the listener is transported to Goa on listening to the upbeat music. Composed and sung by Duplessly himself, "Ding Dong" is easily the best song of the album. Make sure you don't miss out on this one!
The soundtrack of Finding Fanny is admittedly different, but it brings about a much needed change in Bollywood's music scene. While we at BollyCurry give the album 3 stars out of 5, we can only hope that the audience too takes a liking to this different genre of music.
BollyCurry urges you to tune into YouTube or your favorite music-streaming website to give the soundtrack a listen. Comment below and let us know what you think of the album, and how excited are you for the release of the movie on the 12th September, 2014!
Author: Ritchelle C.
Editor/s: Mohini N. and Sonia R.
Graphics: Shikha A.