With the title being so out of the blue, one does go into deep ponder about what possibly the music album of the film has to offer! Well, surprisingly, this album does take you into a melodious journey, from which you might not wanna return!

It's a fact renowned, that the music of Salman's films are quite the USP of the film. But it is yet to be seen whether Bodyguard will make the masses groove like his numerous recent chart-busters like Jalwa, Munni Badnam Hui 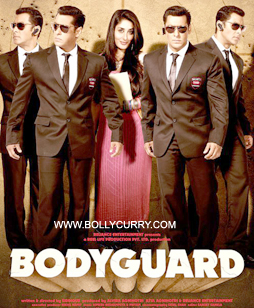 , Tere Mast Mast Do Nain, Dhinka Chika or Character Dheela! Read on to know more about what this film's soundtrack has to offer!

The album kick starts with the title track Bodyguard which is nothing but a futile attempt for another Dhinka Chika like feel. The song ends up sounding like a pathetic attempt to produce a copy of the much popular song. The tune, lyrics as well as the vocals are fairly subpar! You wouldn't be missing much by hitting 'skip' on this one!

The second track in the album is a sweet, melodious love song, which goes by the fairly uncreative name of I Love You. And that is where the cliche stops as the song is a far better creation than it's name! The beautiful vocals are provided by Ash King and Clinton Cerejo. It sounds perfectly apt for a young lad falling in love for the first time. Pritam has successfully captured the essence of love with this one to the point that you will want to forget everything around you and remember your own first love. You might wanna hit repeat once the song fades, be warned!

Next up, is an electrifying Punjabi track which is perfect for dancing! Desi Beats is sung by Mika in his dynamite like baritone, with Amrita Kak lending her affective voice in perfect compliment. The song begins out as a disco-hip/hop track and then ultimately morphs into a fun-filled Punjabi track, to which Salman and Kareena groove along! The song will definitely have you jumping out on to the dance floor to show your moves - consider yourself forewarned!

The song Teri Meri is the probably the best thing about the whole album. With Shreya Ghoshal and Rahat Fateh Ali Khan behind the vocals for the song, the song creates magic! It is a soft yet powerful, gloomy yet intense song which tells the tale of how these two fellas fall irrevocably in love but cannot unite because of unfavorable circumstances. The song is penned down beautifully and the melody compliments the lyrics perfectly. It is a love song which is here to stay! It touches your soul with plain rendition; negligible instrumentation and powerfully emotional wording. The song simply clicks and you fall in love with it in the first listen.

The album contains 12 songs with the remaining 8 being remixes and unplugged versions of the ones stated above. The Unplugged version of I Love You has been crooned beautifully by Shaan along with Clinton Cerejo. It is soothing and one goes into a peaceful trance while listening to the song.

Although, the music is not up to the level it should have been, it is composed by Himesh Reshamiya and you couldn't have asked for better in his 'return'. The songs I Love You and Teri Meri work in the favor of the musician and are the high-points of the album. Though, the latter is composed by Pritam and all praise goes to him!

On a whole, the album is a good listen and definitely worth a try! Most of the songs are nothing memorable, but there are some gems in the album with a charm of their own. Although, an album of around 12 songs should at least contain as much as six original songs - this isn't a bad deal!

We highly recommend giving Teri Meri a listen! Let us know what you think!