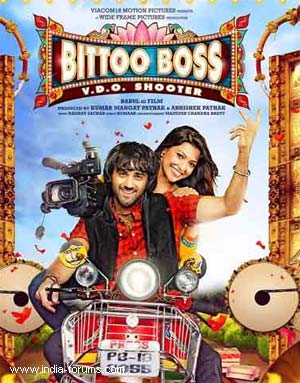 Forget about DK Bose as Bittoo Boss is here to take over. Already, embroiled in a controversy with the censor board having a problem with its double inuendo lyrics, most people still haven't heard the song. Naughty to the core, in this song singer Mika dabbles with the international sound of composer Raghav Sachar.

After a two-year hiatus, Raghav has done just the perfect job of East meets West with the soundtrack with three lyricists at his disposal.

The title track of the album 'Bittoo sab ki lega' instantly hits you. If you are able to adjust your ear buds to the unconventional words and engross in the music, the song is a pure delight. Penned by Luv Ranjan of 'Pyaar Ka Punchnama' fame, the song is so likeable that you will keep pressing the repeat button over and over again.

Next on the playlist is 'Kick lag gayi'. Sung by Mater Saleem and Tulsi Kumar, it is tailormade for wedding galas. A heady mix of traditional lyrics like 'Latthe di chaadhar' fused with Punjabi beats, the song makes you break free. It even has a reference to pop star Lady Gaga.

The song has another version with Raghav himself taking center stage as the singer. Both of them are equally good, but the former is more upbeat though it's hard to choose the better one in terms of composition.

Relaxing you on the couch is 'Kaun kenda', a love song crooned by Sonu Niigaam and Shreya Ghosal. It reminds you a lot of the song 'Dekho na' from 'Fanaa'. The Punjabi lyrics touch you and the duo has done a wonderful job transporting you to the mustard fields of Punjab. Brownie points to Raghav for including a qawaali segment that gives the song a mystic feel.

The song also has a slower acoustic version with Shreya behind the mike along with background intone of Shahid Mallaya.

Love is followed by heartbreak in the form of 'Mann jaage'. Sung by Shahid, the sad number explores sadness that creeps in when the person you love the most goes away.

But the next number 'Kabootar' peps up the mood again and Mika again delivers the right punch. Although it doesn't surpass the title song, one has to admit that every song by Mika these days is a sure shot hit with the desi tadka that he propounds with his majestic voice.

Last but not the least is 'Audi', a signature Raghar song and Natalie Di Luccio joins him in it. Although it has Punjabi lyrics, and the chemistry Raghav creates by enjoining guitar riffs with R&B sounds makes it different.

All and all, the soundtrack is worth a buy and hopefully Bollywood gets to see more of Raghav in times to come.

Millind Gaba On His First Collaboration with Tulsi Kumar and Jaani for ...

Chris Rock Jokes About Shooting for 'SNL' Premiere From ...
33 minutes ago

Karan Johar Breaks Silence: "I Do Not Consume Narcotics"; ...
35 minutes ago

Kangana Slams Anushka for Raising her Voice Against ...
2 hours ago