Q. What is playing on your I-Pod these days?
A. I am listening to a lot of the 'Om Shanti Om' soundtrack. I specifically love the song I have sung – 'Deewangi Deewangi'.

Q. What type of music do you like, and what irritates you?
A. 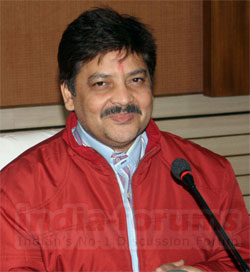 Featured Video
If the singer is also good, then that becomes the icing on the cake. And music never irritates, whatever the genre, but I have a dislike for songs where everything is wrong – the lyrics, the tune, the singer – and in which there is no sweetness. These kind of songs become popular, for some reason, and I wonder why. Music should not only soothe the ears, but the mind as well.

Q. Amongst the recent releases, 'Om Shanti Om', 'Saawariya', 'Jab We Met', and 'Goal', which one has the best music?
A. I really like the music of 'Om Shanti Om'. The soundtrack has great songs, and great music. I am not saying the music is different, or the songs are unique, but it is soothing music. And I am definitely not saying this because the movie is a hit. I had told Vishal-Shekhar much before the music release that the songs were going to become a hit of the year. Co-incidentally, even the movie became a hit, and I was proved right.

Q. Do you prefer the original over the remix?
A. The original. I do not like replicas.