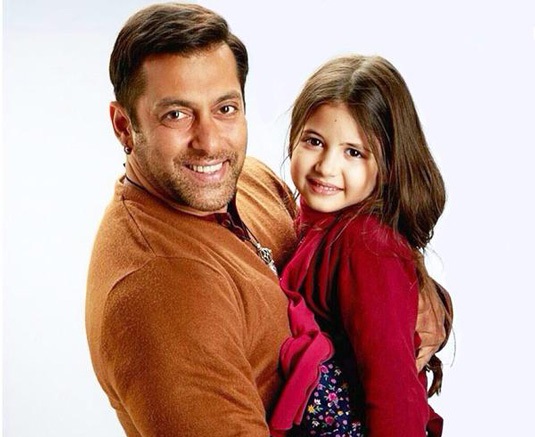 Bajrangi Bhaijaan is creating a stir all across the globe. It's not only Salman Khan and Nawazuddin Siddiqui who are being applauded for their performances in Bajrangi Bhaijaan but also the cute little girl Harshaali Malhotra is on the receiving end of many praises from all across.
Harshaali who played the mute Pakistani girl in Bajrangi Bhaijaan is indeed a talkative kid in real life. Just like any debutante, even Harshaali aspires to kiss the fame on a larger scale someday.
During the recent media interactions, Harshaali was quoted saying, "I like acting and singing. I want to be a superstar like Salman uncle". She also shared some of her memorable moments while shooting the film.
"I used to play games with Salman uncle on cell phone. I used to sit on Kabir uncle's lap and play Barbie games. Kareena aunty was busy with shoot so did not get time to play games with her," she said. Adding to this she further said, "Salman uncle used to play table tennis with me in Karjat".
According to sources we even got to know that Harshaali used to cry watching Salman doing fight sequences. Also when her Bajrangi Mama performed intense scenes little Munni used to get emotional and teary eyed.