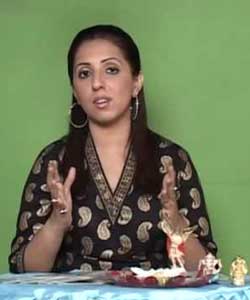 We hear that Munisha is shooting for her episode today and the sequence will be aired in tomorrow's episode.

According to our source, "Shantanu (Karan Tacker) by chance bumps into Munisha Khatwani, who plays herself in the show. She will be instrumental in helping the couple come together. As the episode progresses she will be seen predicting the future love life of Shantanu and Kanak (Yashashri Masurkar).

When contacted, Munisha Khatwani confirmed the news and said, "Yes, it is extremely delightful to get back to TV screen. I play myself, a tarot card reader in Odhani, who plays cupid to the lead couple."

Munisha Khatwani has earlier been seen in shows like Sindoor Tere Naam Ka, Vaidehi etc. Her last TV appearance was for Kismat Ka Khel on 9X.

8 years ago her appearance in Odhani was nyc.
miss our RBO.

9 years ago she did good cameo...n really looking forward to see her prediction 4 shanak...

9 years ago loved her cameo in RBO... munisha is too good

9 years ago Really enjoyed watching her Cameo. Good thing she got to play herself

9 years ago really looking forward to see her prediction for shanak in future track...

9 years ago Liked her cameo on RBO, nice to see her play herself.

9 years ago hey RBO is d best..n this track was one of d best track of RBO...