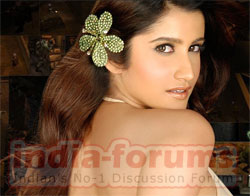 "Kalyug" girl Smilie Suri has joined the long list of celebrities turned animal activists. It all started when the actress received an sms about an abandoned Lhasa Apso on Juhu beach. "I gathered all my courage and visited Ahimsa, a foundation that provides shelter to abandoned animals. The scene there was heartrending. There was a sea of homeless pets, some sick, some dying, but all very loving and yearning to be loved," recalled Smilie, who immediately made up her mind to adopt an animal. The Lhasa Apso was adopted by two girls. For Smilie, it was love at first sight with a Fox Terrior pup. "I adopted him from a litter of eight from the owners who help find homes for abandoned dogs," said Smilie. She has named him Mumbo.

On the work front, Smilie is busy with her forthcoming film "Breaking News", directed by N.Chandra, in which she is playing the role of a call centre girl. It also stars Anupam Kher, Seema Biswas, Sarika, Rajpal Yadav, Parveen Dabbas, Perizaad Zorabian, Rajat Kapur and Purab Kohli.